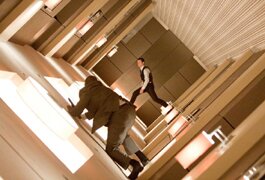 To view Inception is to witness a modern director at the top of his game. Christopher Nolan has always displayed a penchant for time-shifting narratives; for themes of duality, identity and perception. His stamp is all over Inception, the story of a man who invades the dreams of others to steal their secrets, but whose own secrets threaten to destroy him.

On one level, Inception is little more than an excuse for Nolan to indulge himself in a variety of genres that appeal to him, from action to noir, without having to fully commit to a plot for any of them. But Nolan combines the variant threads so well you never feel as if you aren’t watching the same film. This unique set-up allows Inception to deliver dazzling sequences that can’t be found in other (lesser) movies. I think to stand the test of time a film needs to have a scene or two that on their own could be classified as iconic, ripe for both admiration and parody. Inception offers several.

The core of Inception is a heist film focusing on Cobb (Leonardo DiCaprio), who is known as an extractor. Aided by a specialized team trained to manipulate the dream state, Cobb is hired to steal confidential information from the minds of his victims. He does this through the technological conceit of “shared dreaming,” which is actually more akin to a “Matrix”-style virtual reality that uses the human brain as a processor. Cobb’s latest job turns out to be a trap by a rich businessman (Ken Watanabe) who wants to hire him to enter the mind of a competitor (Cillian Murphy) to plant an idea.

Such a thing is tricky, since foreign ideas don’t always stick, Cobb says. But dig deep enough into the subconscious and the mind can be turned against itself. And thus we are plunged into a caper of dreams within dreams within dreams, setting up one of the most complex plot structures one might expect to find in a film. This is the rare summer blockbuster that doesn't talk down at its audience. Yet once you see it, you will marvel at how utterly simple it all actually is.

Cobb’s own secret involves the mysterious death of his wife (Marion Cotillard), whose memory haunts his mind and seeks to unravel his intricate plans. This sets up one of the film’s primary motifs: How we allow our regrets to continue to define us. All Cobb wants to do is return to America to see his children, but his memories of them keep getting in the way.

Nolan’s penchant for structure and experimentation over blatant emotionalism have landed him in hot water among some of the critical elite. For many reviewers, he doesn’t fit the bill of their preconceived notion of what a director needs to be. They seem more annoyed by the idea that Nolan would be considered a major director before they are ready to proclaim such a thing themselves (How DARE he make a real film out of a superhero movie!!!) Thus they revert to the primal instincts of the critic. When one has the mindset to hate, it is easy to find fault in any film. The shame is to allow what would otherwise be minor nitpicks be used to justify harsh complaints. The real trick is to recognize when the good outweighs the bad.

As far as Inception is concerned, the good dominates. The writing is smart, the performances are terrific, the visuals are stunning and the music is intense. To me, Nolan’s genius is in the elegance of his presentation. He consistently delivers a good story, filled with memorable scenes and ideas that spark debate. This is the mark of a great filmmaker. With the back-to-back triumphs of The Dark Knight and Inception, Nolan has emerged as one of the best directors of our time.