You May Not Kiss the Bride (DVD Review) 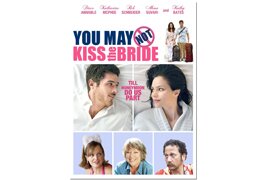 Take a solid cast of ‘B’ movie performers, set them up in a serviceable romantic comedy and saddle them with TV-movie theatrics and you get You May Not Kiss the Bride, an appealing yet superfluous piece of direct-to-video fluff.

The hapless sap at the center of it all is Bryan (Dave Annable), a pet photographer trying to make ends meet while fending off the aggressive sexual advances of his assistant, Tonya (Mena Suvari). During one unfortunate afternoon, a dog he was photographing attacks and injures a cat owned by a local Croatian mafioso’s wife.

The mobster (Ken Davitian) wants to secure U.S. citizenship for his daughter, but his attempts to bribe government officials keeping tabs on his criminal activities don’t go over too well. So he recruits Bryan to marry his daughter, Masha, in exchange for not killing him for the harm to his wife’s cat.

Of course Bryan is reluctant to go through with it, but does anyway, and it’s little surprise he ends up falling in love with Masha at first sight because she looks like Katharine McPhee. But the mobster warns Bryan not to sleep with her, as she is destined to marry his chief lieutenant, Brick (Vinnie Jones), after she gets her citizenship in a year. (Since Bryan kisses her at their sham wedding, the title isn’t exactly accurate.)

But Masha doesn’t want to marry Brick, and starts to fall for Bryan as they head out for their “honeymoon” in the South Pacific. Jealous Brick follows them to make sure nothing happens, while Tonya crashes the party hoping to seduce Bryan. Along for the ride are a couple of local islanders played by Rob Schneider and Tia Carrere, who get involved when Masha is kidnapped by masked thugs, setting up a veritable comedy of errors as Bryan vows to rescue her rather than risk the wrath of her father having to pay a ransom.

The movie’s tone is all over the map. In one scene it wants to be a slapstick comedy before turning into a deadly shoot-em-up thriller.

It’s not exactly Bogart and Bacall we’re dealing with here. But the tropical locales are lush, the leads are attractive, and it’s hard to come down too hard on a movie that offers McPhee in a bikini half the time.