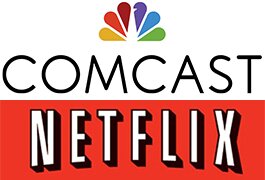 Comcast and Netflix Feb. 23 announced a partnership whereby Netflix will pay to have direct access to the cabler’s broadband network. Heretofore, Comcast had denied Netflix free access, forcing the service to use slower third-party networks.

Indeed, Comcast's average ISP speed for Netflix subscribers dropped nearly 30% since October, according to Netflix's monthly ISP rankings. With Netflix agreeing to usage-based billing (UBB) with Comcast, its streams should have a more direct path to subscribers.

In a statement, Netflix said it receives no preferential network treatment under the multiyear agreement, terms of which are not being disclosed.

The coupling does not make Netflix a direct SVOD option to Comcast subs — a scenario Netflix CEO Reed Hastings suggested several years ago as a forward strategy multichannel video program distributors could offer subscribers as a means of retaining and luring subs.

Indeed, Comcast chairman Brian Roberts, in the years since Hastings’ overture, has steadfastly denied any interest in offering Netflix as a broadband option. Comcast has its own SVOD service, Xfinity Streampix, which enables subscribers access to movies and TV shows for a $4.99 monthly surcharge.

The joint statement offered no comments from executives or reasoning for the partnership, other than saying the two companies have been “working collaboratively over many months,” and that this deal establishes a more direct connection between Netflix and Comcast, delivering an “even better user experience” to consumers, while also allowing for future growth in Netflix traffic.

“No one on the outside knows what is happening in this market. However, it is clear that residential ISPs should be in the business of charging their users for access the Internet, not of charging the rest of the Internet for access to their users," John Bergmayer, senior attorney at Public Knowledge, said in a . "From what information is public, it appears that the largest ISPs are demanding payment from networks that deliver content and services that residential broadband consumers demand. Because the large residential ISPs themselves are the ones keeping the terms of their deals secret, it raises the question of whether they have something to hide."

Tony Wible, analyst with Janney Capital in New York, said it is too early to determine the impact of usage-based billing on Netflix. Wible said Netflix deals with UBB in Canada with minimal effect despite the fact usage rates can be as high as $2 per gigabyte compared to about 20 cents a GB for Comcast.

"Although these are consumer price points, we assume the corporate/sender pricing would be comparable and believe it is in the MSO's interests to keep the rate at a level that does not undermine the demand for broadband," Wible wrote in a Feb. 24 note.

The analyst contends Netflix is paying Comcast in order to maintain superior streaming quality while at the same time outspending the competition for content.

"We believe Netflix has been progressively raising the stakes in streaming through aggressive content spend. Few others can match [its content] spend without incurring massive losses. The competition may now have to cope with additional fees that sway their willingness to compete if they do not already have a large sub base," Wible wrote.

Netflix ended its most recent fiscal quarter with more than 44 million members in 41 countries. Comcast just announced it would purchase No. 2 Time Warner Cable for $45.2 billion. If approved by regulators, the combination would include more than 31 million video subs in the U.S.