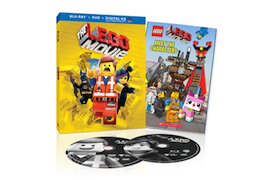 Retailers were quick to jump on promotional tie-ins June 17 for one of the biggest home video releases of the year — Warner’s The Lego Movie.

Target probably made the biggest noise about the title, splashing The Lego Movie and "Lego" products across two pages of its weekly ad circular. The chain offered an exclusive version of the Blu-ray combo pack with special box art and a kids activity book packed inside. Target also offered a $10 savings with the purchase of The Lego Movie on Blu-ray with a select "Lego" video game or toy set. Online, Target offered free shipping for all online orders through Target.com/Lego.

Best Buy wasn’t as aggressive with its circular advertising for The Lego Movie, but still devoted significant space to the title, and offered $10 off with the purchase of both The Lego Movie and the tie-in video game.

Walmart had a couple of exclusive editions of The Lego Movie. It offered the Blu-ray combo pack with an episode of “Lego Ninjago: Masters of Spinjitzu” through its Vudu.com streaming service. Walmart also offered a single-disc DVD edition of the film, as opposed to the widely available two-DVD version. The chain had a big “Lego” aisle display, half devoted to the new movie and half to other Lego movies and TV shows and Lego books.

In addition, Walmart had exclusive availability of several additional titles, offering a “Lego Star Wars” three-movie DVD from Fox for $14.96, Doc Holliday’s Revenge from Lionsgate for $12.96, and two animated movies from Universal for $12.96 each — Knight Rusty and Rooster Doodle-Doo.

Costco offererd most of the new titles for the week, although the location in Fountain Valley had just the Blu-ray versions of The Lego Movie and Fox’s Grand Budapest Hotel, and only the DVD versions of Showtime’s Ray Donovan: Season One and Sony Pictures’ House of Cards: Season Two. 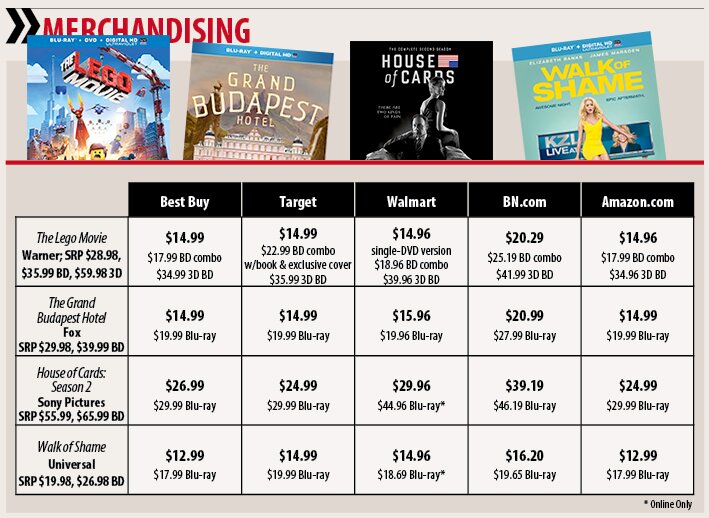