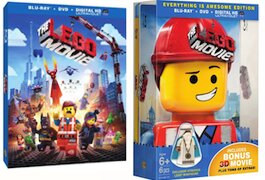 What stands out most about The Lego Movie, aside from the humor and clever premise, is the way the CG animation mimics the quirks of the stop-motion technique, which is all the more effective in 3D and a great way to celebrate the unique nature of Lego as a toy line.

While on many levels, the film is essentially a toy commercial (indeed, some of the behind-the-scenes clips shows producers visiting Denmark to get footage approval from bigwigs at the toy company), it also trades on that creative spark that makes Lego toys so popular to begin with. At its core, The Lego Movie is a fun celebration of imagination.

Where else is one likely to find a crossover between Batman, “Star Wars,” the “Teenage Mutant Ninja Turtles,” “Lord of the Rings” and many of the dozens of brands handled by Lego? There’s nothing here any kid who has ever played with Legos probably wouldn’t have done. The story is reminiscent of Toy Story or Wreck-It Ralph in that regard.

There are also elements recognizable to fans of the various "Lego" direct-to-video movies and TV shows, such as the “Star Wars” and “Batman” tie-ins, primarily the kind of "Lego physics" that let characters de-construct and re-construct objects using the bricks on hand.

The animation plays with these conventions as well, using Lego pieces to depict almost all aspects of the world, including water and steam. The level of detail is incredible. Even the laser beams look like translucent plastic pieces. The decision to mimic stop-motion animation, when combined with the 3D effects, really heightens the feeling of existing in the Lego world, which enhances one of the film’s key plot twists.

The film’s production design is the primary focus of the bonus material, with several featurettes touting the animation process (all the sets and vehicles were created virtually brick-by-brick with a Lego design program). This extends to a few videos with instructions on how to make some of the items in the movie. There are also a lot of promotional videos, some fan films, deleted scenes and outtakes.

The Blu-ray also includes an entertaining commentary with directors Phil Lord and Christopher Miller, and stars Chris Pratt, Will Arnett, Alison Brie, Charlie Day, Nick Offerman and Elizabeth Banks. The commentary is loaded with trivia and revelations about hidden details in the film.