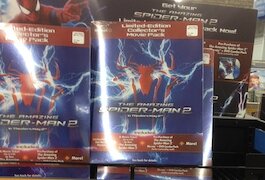 Walmart has been taking preorders for Lionsgate's Divergent Blu-ray, as well as selling movie packs for Sony Pictures' upcoming The Amazing Spider-Man 2.

For Divergent, which has yet to be announced for a home video release, the $24.96 preorder includes instant access to two exclusive featurettes through Walmart's Vudu.com streaming service — a "Go Behind the Scenes of Divergent" featurette and a "The Look of Divergent" featurette. Buyers will receive the film's Blu-ray combo pack via the mail once it's released.

The $29.96 The Amazing Spider-Man 2 Limited-Edition Movie Pack includes a $10 voucher toward a movie ticket once the film opens in theaters May 2, foil movie posters and a preorder of the eventual Blu-ray combo pack to be sent via the mail.

Speaking of Spider-Man, Target attached a $10 coupon for the new movie to copies of the Blu-ray of The Spectacular Spider-Man: The Complete Series.