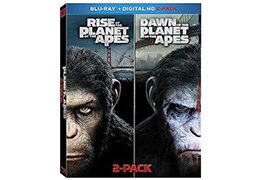 The Dec. 2 disc release of Fox's Dawn of the Planet of the Apes was the latest high-profile title to secure exclusive deals at the big retail chains.

Walmart probably had the most substantial exclusive, offering a special Blu-ray double feature of Dawn with its predecessor, Rise of the Planet of the Apes (in lieu of the regular Blu-ray edition at some stores, where the 3D version wasn't offered at all).

Best Buy had the 3D version of Dawn packaged in an exclusive metalpak case.

Among other titles, Walmart had an exclusive edition of the Jingle All the Way 2 DVD packed with a toy bear, and Target had the new Teenage Mutant Ninja Turtles: Showdown in Dimension X DVD from Nickelodeon with a sneak peek at Paramount's upcoming Teenage Mutant Ninja Turtles live-action film Blu-ray (due Dec. 16) and coupons for $2 off the movie and Pop Secret popcorn.

Speaking of Paramount, some of the studio's distributed titles appear to be delayed to some Best Buy stores. The chain's weekly circluar touted availablility of the Blu-rays for Star Trek: The Next Generation — Season Seven, Star Trek: The Next Generation — All Good Things and The Legend of Korra: Book Three — Change, but the store in Costa Mesa, Calif., didn't have any copies on shelves when the store opened the morning of Dec. 2 (the aforementioned "TMNT" Dimension X DVD also was missing). A clerk said the shipment hadn't come in but expected it within the hour. By afternoon, the titles still weren't available, nor were they stocked at a Tustin, Calif., location, and were listed online as unavailable for store pickup at many Southern California locations.