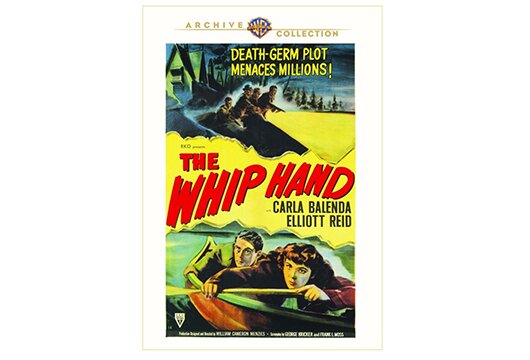 The artistic annihilation of RKO under Howard Hughes began, to my mind, early, when the mogul sat on Nicholas Ray’s magnificent They Live by Night and wouldn’t release it in the U.S. until two-and-a-half years after it was made. Which isn’t to claim that the predominantly trashy studio output that dominated the Hughes regime was devoid of fun: I happily grew up with these pictures because the RKO package was on TV all the time (including at 5 p.m., right after I got home from elementary school and junior high) beginning in the later 1950s.

Hughes had a Cold War fixation that probably reached its big-screen apotheosis with Josef von Sternberg’s Jet Pilot, the brain-damaged U.S.-Soviet comedy that he so incessantly tinkered with that the picture didn’t see theaters for seven years after production — just in time for me to be 10 and already most appreciative of what its pajama-enhanced profile shots of Janet Leigh had to offer (this wasn’t like gazing at, say, Joan Crawford, and I went back to see it a second time). Made on much less of a budget — but still over-budget, given Hughes’s proclivity to order re-shoots — was The Whip Hand. According to both the 1950s’ AFI Catalog and the great coffee table reference jewel The RKO Story, it was filmed “in secrecy” — as if Hughes were plotting to spring something truly astonishing upon an unprepared world that would ultimately prove grateful.

Hughes is kind of the auteur here, though you’d think this designation would go to the nonpareil production designer and occasional director (as in this case) William Cameron Menzies. I haven’t yet read James Curtis’s praised new book on Menzies, though I’m anxious to because just last year, his Spencer Tracy bio gave me the speediest read of a very long book (over a thousand pages) since Norman Mailer’s The Executioner’s Song. As a result, I can’t tell you what Curtis’s new effort has to say about Whip — though you can search a long futile time trying to spot much evidence of the visual flair that director Menzies brought to, say, the original Invaders From Mars just a couple years later. Still, Whip moves at a reasonable clip and is a must for completists who need to see every movie in which Raymond Burr played a 300-pound heavy in both senses.

Though apparent Hughes fixation Carla Balenda is top-billed, the star here is Gentlemen Prefer Blondes’ Elliott Reid, who, though agreeable enough, was never anyone’s idea of a bobble-head action hero or (back then) a foxhole companion in the Korean War. Not that he tries to be: as a vacationing magazine journalist who merely wants to catch some fish while on vacation, he comes to a small New England burg and gets Bad Day at Black Rock treatment from the locals who have no wish to speculate why a once-thriving (or least more thriving) tourist spot has turned into the next thing to a ghost town. Suffering from a head cut he endures while snooping around behind stern “No Trespassing” warnings, he goes to the local doc who’s played by Edgar Barrier (incredibly, I used to know a big Barrier fan because the actor appeared in a couple Maria Montez howlers). Nurse Balenda plays his sister with a perpetually worried look on her face — the kind one gets when sensing that something unseemly or worse is up. Well, what do you expect when Burr is listening in on everyone’s phone calls from a bugging post in the fleabag hotel he operates?

Without engaging in too many spoilers (as if it matters), let’s just say that the movie was originally conceived to deal with the presence of a survived Hitler in the town before Hughes’s anti-Communist fixation got the better of him. As a result, we instead have former Nazis who’ve now pledged allegiance to the Soviets (don’t even worry a smidgen about Leningrad, guys; all is forgiven). They are still, however, menacing in the scientific lab — and Reid nearly discovers the subcategory of “no good” that they’re up to when suffering the forehead abrasion. It all gets pretty wild in a fairly morbid finale, even above and beyond the appearance of coat-and-tied FBI agents showing up in this Field & Stream kind of town with Tommy Guns. Did J. Edgar Hoover have to approve this movie, or did Hughes have a carte blanch agreement to do what he wanted? I can’t see JEH showing up at the premiere with Clyde Tolson in tow and smiling into the klieg lights.

This movie is definitely a window into the Hughes mindset, even down to the charitable casting of pretty-but-bland Balenda, who started out as Sally Bliss, then made four features (three as lead) at RKO as Balenda, then went back to being Sally Bliss (she ended up playing Jon Provost’s teacher on TV’s “Lassie,” whose plots weren’t likely to feature former Nazis). Despite all the retakes and script inversions that Hughes ordered, the result didn’t put much of a dent in the national consciousness, though it was and is a Cold War amuser that offered counter-programming to Mario Lanza movies. Yet with all of Hughes’s tinkerings and re-shootings, Whip hit with all the box office force of, say, the same year’s Pals of the Golden West, with Roy Rogers and Pinky Lee. In my hometown, it played as second feature for a week with The Blue Veil — a pretty fair soaper that has spent decades in some kind of rights quagmire that has made it all but impossible to see.

New on Disc: 'Where the Sidewalk Ends' and more …