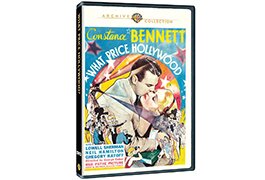 After maybe three decades since my last viewing of it, I’d managed to convince myself that this unofficial first screen version of what later halfway morphed into A Star Is Born really didn’t have that much to do with that thrice-filmed warhorse in its plot particulars. Yet, as it turns out, this still relevant David O. Selznick-George Cukor collaboration has more in common with its trio of successors than I expected, even in its visual treatment of film fan hysteria, which anticipates the mass mayhem Cukor gave us in his own 1954 Judy Garland-James Mason version of Star (still the most potent of all versions by a fairly monster margin). And though Cukor was an auteur practically from the get-go — his co-directed The Royal Family of Broadway from 1930 is still surprisingly entertaining despite some creaks — Price is probably the first movie he made that belongs on a list of his major achievements from a screen career that eked its way into a sixth decade.

A key difference between this warm-up and the three official renderings of Star is its romantic focus. In this case, an aspiring actress (Constance Bennett) is merely a great friend, not eventual wife, to a substance-abusing industry figure of prominence. In the same vein, the latter (Lowell Sherman) is a movie director and not a performer, as the characters played respectively by Fredric March, Mason and Kris Kristofferson would be. In real life, Sherman really was a director in addition to actor — one who could claim Katharine Hepburn’s first Oscar-winning performance (Morning Glory) and the first Cary Grant-Mae West teaming (She Done Him Wrong) on his filmmaker resumé. He doesn’t exactly look like the picture of health here (which, of course, helps him in the role), and he was dead of pneumonia a couple years after Price came out, back when actors who were in their mid-40s frequently looked two decades older.

Blonde Bennett was the sister of Joan, who was blonde herself in the 1930s before becoming a great brunette Fritz Lang noir queen in the mid-1940s. The former is quite appealing and sympathetic here as a Brown Derby waitress who so successfully humors inebriated customer Sherman at that famous eatery that he takes her to a premiere and later mentors a career that gets out of the gate in a fair flash. In real life, Bennett knew where the money was and managed to do financially well for herself, though here she convinces as one with reservoirs of humility despite her success. She sticks by the Sherman character without disillusioning herself about his elf-destructive excesses, and the friendship between them seems real. The more conventional screen moments here come courtesy of Bennett’s romance with a polo-playing moneybags who isn’t in the industry and doesn’t understand all these crazy people. He’s played by Neil Hamilton, who’d eventually end up as Commissioner Gordon on TV’s “Batman” series from the 1960s and as one of those familiar faces who ended up in Jerry Lewis movies around the same time.

Based on a story by a one-time talk-show mainstay of my youth — Adela Rogers St. Johns — the movie employed a boatload of writers (was Selznick ever happy with a script?) and is savvy in its knowledge of the filmmaking business, even though talkies were still on the far side of their infancy. The backlot/screening room stuff here still has some snap, even if Gregory Ratoff’s portrayal of a studio chieftain threatens to step over even the broad boundaries of a caricature probably based on Samuel Goldwyn. There’s also a skillful montage late in the film that Cukor worked out with Slavko Vorkapich, who toured and lectured about the art of montage pretty well up to his death in the mid-1970s.

Divulging the motivation for this memorable scene serves probably veers into spoiler territory, but the late Ron Haver devoted the better part of a glossy page to it in his landmark coffee table book David O. Selznick’s Hollywood, which is never too far away from my thumbs. Though Selznick later ended up firing Cukor from Gone With the Wind, their track record together was good. In another year, they’d move out of RKO and over to MGM for Dinner at Eight and David Copperfield — glossier productions than Price’s financially strapped RKO could usually bankroll. But overall, this picture is among the more humble studio’s better achievements of the era that didn’t star Fred Astaire, Ginger Rogers or an oversized gorilla.

New on Disc: 'The Eddy Duchin Story' and more …