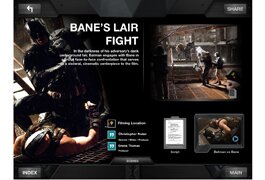 The studio did its first second-screen application earlier this year with Happy Feet Two, and its second with the summer release of Sherlock Holmes: A Game of Shadows. The latest — the second-screen application for the Blu-ray Disc release of The Dark Knight Rises, out Dec. 4 — builds on the already available “TDKR: Gotham City’s Most Wanted” app, which was out in conjunction with the theatrical release.

Progressively, the studio has become more attuned to what consumers like about the second-screen experience, according to Donnie Roache, executive director of disc operations and creative services for Warner Home Video, and with this newest app, users can spend the better part of the day immersed in the world of the film.

“This works nicely for the casual viewing or for the more hardcore viewer,” he said. “We continually explore [what to add]. That’s the interesting thing about apps, they continue to live on. With every one we do we learn more and more about the technology and what we can do with it.”

By synching the Blu-ray Disc to the application on a iPad, iPhone or Samsung Galaxy devices including S2, S3, Note, Nexus and Tab, users get access to a mountain of exclusive content, covering everything from maps, trivia and gadgets to photo galleries and featurettes.

There are storyboards, script selections, filming locations, schematics — you name it. Users can flick the second-screen content to the big screen with a touch, can synch the application to where the movie is or visa versa, at any time, and can choose from nine different languages. There are links to outside websites, such as the D.C. Comics site, and when users have both the application and the Blu-ray running, they can access bonuses that are not available to those using just one or the other.

Warner is looking to add support for Android and Microsoft-based devices, and is also mulling making UltraViolet versions of the film supported by the second-screen application.

For all the work Warner is putting into its second-screen experiences, you’d think a small fee for the app would be in order. Instead, it’s free, and it’s free for a reason, according to Jonathan Gaines, executive director of disc special features for Warner Home Video.

“For us it’s giving more value to ownership,” he said. “It’s an enticing offer that’s hard to say no to.”

Those who rent or only buy a digital version of The Dark Knight Rises won’t have access to everything the second-screen app offers.

The application also includes some whimsical interactive features, including the ability for users to insert their photos into theatrical posters and create videos with vehicles from the film.