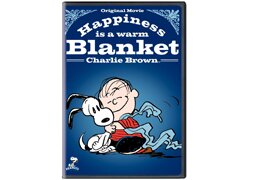 Charlie Brown, Snoopy and the rest of the “Peanuts” gang are now in the hands of a new generation.

The latest “Peanuts” animated special, Happiness Is a Warm Blanket, Charlie Brown, comes to DVD March 29 from Warner Home Video at $19.98. It’s the 45th special based on the legendary Charles Schulz comic strip, which ran from 1950 until his death in 2000.

It’s also the first “Peanuts” special since He’s a Bully, Charlie Brown in 2006. The five-year gap is the longest between specials since they began in 1965 with A Charlie Brown Christmas. The longest previous gap was four years in the 1990s.

According to Craig Schulz, son of the “Peanuts” creator and executive producer and co-writer of the new special, it took a while to sort out details relating to the comic strip library, in addition to deciding how to produce the new specials. Previous “Peanuts” animation had been provided by the animation studio of Bill Melendez, who died in 2008.

“We wanted to create a special that looked like something that was done in the 1960s,” Schulz said.

After examining some script ideas, Schulz said the family decided the best way to preserve the legacy of the franchise was to handle it themselves.

“The family doesn’t want to harm the property in any way and isn’t looking to take risks with it,” Schulz said.

Schulz said the biggest challenge for him was to create something worthy of the “Peanuts” legacy.

“I didn’t want people to say the son of Charles Schulz came in and ruined it,” Schulz said. “I wanted to make something my dad would be proud of.”

Writer Stephan Pastis was brought in to flesh out story concepts and came up with the idea to focus on Linus and the relationship with his security blanket.

“It’s something most kids and every adult can relate to,” Schulz said. “Everyone has something they might need to feel complete, despite parents or grandparents or friends trying to direct you in one way or another. Why is it up to someone else to dictate where you find your security?”

In the special, Linus is told his grandmother is coming to take his beloved blanket away, forcing him to try to figure out how to live without it. But in the process, he learns that all his friends have their own quirky habits that define them.

During the year and a half it took to produce the special, the creative team pored over decades worth of strips to find storylines about Linus and his blanket. Schulz said 90% to 95% of the script came from his father’s original comic strips, with Linus’ final speech about the insecurities and quirks of the rest of the Peanuts gang being among the new material, but intended to be reminiscent of a similar moment from A Charlie Brown Christmas.

Extras on the Happiness Is a Warm Blanket DVD include a deleted sequence and three featurettes: “Deconstructing Schulz: From Comic Strip to Screenplay,” about the story process; “24 Frames a Second: Drawing and Animating a Peanuts Movie,” about the animation process; and “Happiness is … Finding the Right Voice,” about finding the children who provide the voices.

Happiness Is a Warm Blanket is the first of two direct-to-video projects under Warner Home Video’s licensing agreement. At 44 minutes, Happiness is a Warm Blanket also is twice as long as a typical special. Schulz said Warner dictated that, and the creative team is awaiting fan feedback before deciding if the length is appropriate.

“We’re still discussing whether it worked well at that length,” Schulz said.

For the second of Warner’s “Peanuts” specials, Schulz is exploring an story idea about Snoopy vs. the Red Baron, structured as a series of music videos. He said one of the challenges is stretching the story into 44 minutes, though he didn’t rule out the possibility of doing two separate specials to meet Warner’s requirement.

As to why “Peanuts” has remained so popular through the generations, Schulz said it’s really not that big of a secret.

“It’s a show you can trust,” Schulz said. “You can put your kid in front of the TV to watch ‘Peanuts,’ and you don’t have to worry about them seeing anything offensive. It’s often a heartwarming show, and the messages are timeless.”