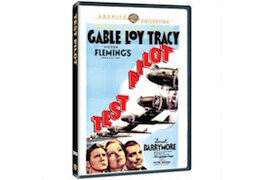 A huge one in its day that has somehow never before gotten a DVD release, this exercise in muscle-flexing star power (from a story by the magnificent They Were Expendable’s Frank “Spig” Wead) is the last project director Victor Fleming took on before earning double-barreled screen credits for The Wizard of Oz and Gone With the Wind in a single year — a presumed 19th Nervous Breakdown if there ever was one. When an extensive 1938 nationwide poll of fans crowned Clark Gable as the “King” of movies, the contest’s less remembered Queen-ly honors went to Myrna Loy — and here was MGM in a position to capitalize. With third-billed Spencer Tracy coincidentally on his way to winning consecutive Oscars for 1937-38 leads in Captains Courageous and Boys Town, there was heft to spare.

Fleming, whose highly praised bio by Michael Sragow is one I must yank from my bedroom shelf and get around to reading, often shoots the trio in close-up or something close to close-up, befitting their royalty — whereas a director at Fox or Paramount likely wouldn’t have wallowed in them as much. This is nothing to make a federal case about (and who could blame him, right?), but it’s not a style of filmmaking I revere, and Fleming has never been one of my favorite directors. In a current era, however, when true-blue stars are hard to find — or some of the contenders show up on talk shows looking as if they were just out cleaning window wells — it’s hard to deny the appeal of the MGM sales job.

The closest Gable comes to looking ill kempt here is when his character (Jim Lane) makes an entrance looking as if he must have slept in his clothes with some good-standing member of his good-time-girl stable — showing up for a test pilot assignment all hung over in yesterday’s shirt-and-tie. Because of Lane’s work habits, best pal “Gunner” (Tracy) has to keep an eye on him. Gunner has no such distractions because, after all, this is Spencer Tracy playing him — and possibly because the actor was cast as priests in a couple prominent MGM releases of the same era, he was deemed by the image makers as being something fairly close to sexless. This gets a little complicated when Lane, in a solo run, survives a crash on a Kansas farm while trying to break the cross-country speed record.

The experience would probably land you a better chance of meeting Francis the Talking Mule than someone as lovely as Loy’s “Ann,” but we’re talking the movies here and readily accept it without question when the farm turns out to be her home and she begins spouting ornate dialogue that is equally in the too-good-to-be true category. They try to feign indifference but both are hooked — and, in the Production Code spirit of the day, almost immediately run off to get married because if they’d simply had a fling, Code honcho Joseph Breen would have been standing over their bed copiously charting their out-of-wedlock sexual positions. Gunner keeps trying to feign disapproval the way the couple once feigned romantic indifference, but as time goes on one senses an unrealized love triangle emerging, at least on Gunner’s part.

My own screen taste in ’30s aviation tends far more heavily toward Only Angels Have Wings and Ceiling Zero (both Howard Hawks) and Air Mail (John Ford); that’s the auteurist in me, but yes, all are better movies. Still, this middle of three Gable-Tracy teamings (San Francisco and Boom Town were the others) delivers a goodly amount of marquee goods, and Loy is as cool on film as she was in real life (her autobiography is tops of its kind). The MGM brass from L.B. Mayer on down knew what it was doing when it came to choosing and promoting its stars, and you have to wonder about the degree to which studio history would have been altered had MGM not plucked Tracy from Fox in the mid-1930s. Or William Powell from Warner Bros., for that matter.

New on Disc: 'The Nutty Professor' and more …