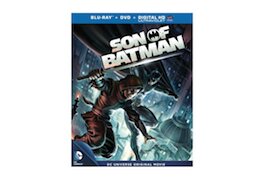 ANAHEIM, Calif. — Batman has been a staple of the DC Universe brand of animated, direct-to-video superhero movies, but the latest entry into the canon has a particular significance, seeing as it arrives in the midst of the 75th anniversary celebration of the character.

Son of Batman, due on Blu-ray and DVD May 6 from Warner Bros. Home Entertainment, also carries on the intent of the producers for more of a shared continuity between the stories told in the DC Universe movies. Warner held a premiere screening of the film for an audience at WonderCon April 18 at the Anaheim Convention Center, with many of the new movie’s cast and filmmakers on hand to discuss the project.

“We’re creating a connected universe within the DTVs. That wasn’t done before,” said producer James Tucker. “Before it was just each movie was its own thing, an adaptation of a classic story. So we’re trying something different by having almost an OVA version of the DC Universe, where there’s connectivity between the movies.”

Based on a 2006 comic book storyline, Son of Batman deals with Bruce Wayne learning he has a pre-teen son named Damian as a result of the manipulations of Talia al Ghul, daughter of longtime Batman nemesis Ra’s al Ghul.

“It’s a really interesting story. It’s refreshing to have a character-driven Batman story that isn’t just about action,” said actor Jason O’Mara, who voices Batman. “This actually kind of compromises Batman’s character and we have to see how he’s going to react to this situation. And it’s kind of funny too.”

As part of the new shared continuity, O’Mara reprises his role as Batman from Justice-League: War, which was released earlier this year. Other voices include Stuart Allan as Damian, Morena Baccarin as Talia, Giancarlo Esposito as Ra’s al Ghul, Xander Berkely as Kirk Langstrom and Sean Maher as Nightwing.

Dialogue director Andrea Romano said she was happy to work again with O’Mara, noting he has really grown into the role.

“There’s a gentleness to Jason’s voice that I think works really well, especially in a kind of emotional story,” Romano said. “There’s a sensitivity to Jason that’s very appealing.”

The film also uses the same design aesthetic as Justice League: War, which was based on the rebooted origin of the Justice League from the DC Comics New 52 relaunch in 2011.

The filmmakers were especially excited for the chance to depict Damian, a character who eventually becomes the newest iteration of Batman’s sidekick, Robin, in the comic books.

“The challenge is to do something that hasn’t been done before,” Tucker said. “Damian is great because he’s a character that hasn’t appeared anywhere [in animation yet], and he’s relevant to comics now.”

That excitement was especially true for young actor Stuart Allan, who voiced Damian.

“To be playing Batman’s son, to me that’s amazing by itself,” Allan said. “The fact that he got to be his sidekick and work alongside him is incredible.”