Showtime's ‘Shameless’ on Disc With Ultraviolet 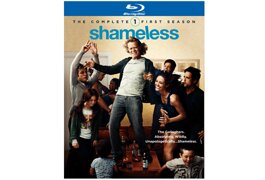 Warner Home Video is set to ring in the new year with Shameless: The Complete First Season on DVD and Blu-ray Dec. 27 (order date Nov. 22).

The two-disc Blu-ray ($49.99) and three-DVD ($39.98) sets include all 12 episodes from the first season of the show about the dysfunctional family of a good-natured alcoholic father (William H. Macy) and his responsible yet randy daughter (Emmy Rossum), who takes on the task of caring for her siblings. The show is adapted from a British series of the same name.

Extras include a behind-the-scenes documentary about adapting the series, a featurette about the casting, another featurette about the show’s sex scenes, commentary for the pilot and another episode, deleted scenes and a preview of the second season, which premieres Jan. 8, 2012, on Showtime.

Also, in a first for a disc release of a TV show, the Blu-ray verison will include an Ultraviolet digital copy, which allows users to download episodes to a PC or Mac and instantly stream them from a digital cloud to other computers, tablets or smartphones.

“‘Shameless’ is the most fun I've ever had working on a show, and the audience reaction to it and our amazingly talented cast has been extremely gratifying,” said executive producer John Wells. “This release gives fans an insider’s look at the show, with wonderful special features that reveal some of the most intimate details about how ‘Shameless’ is made, from the writing to the casting. I'm honored that Warner Home Video has made ‘Shameless’ the first TV on Blu-ray title to come with the game-changing UltraViolet digital copy.”