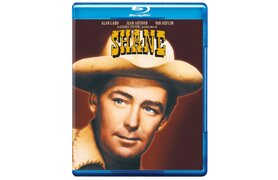 Shane is probably the most gorgeous Technicolor movie Paramount ever made before it got into VistaVision (which meant The Ten Commandments and Vertigo), and even acknowledging its Oscar win for cinematography doesn’t do full justice to its stunning Grand Teton purple mountain’s majesty. Paramount’s color was for decades the industry’s most distinctive, and thus, it may momentarily throw some folks to see its Blu-ray version sharing logos with Warner Entertainment. Not to worry: this hi-def rendering of director George Stevens’ perennial doesn’t have to work very hard to knock off a full warehouse of socks.

Of course, this release nearly became controversial because it was originally going to be released in 1.66. This is an aspect ratio that was still a couple years or more away from anyone’s consciousness when Stevens and cinematographer Loyal Griggs shot Shane in 1951 before the former spent all of ’52 in the editing room — as was the Stevens style in the second half, or most of the second half, of the director’s career. The picture’s spring-of-1953 opening, however, coincided almost on the button with announced industry plans for widescreen movies (both anamorphic and 1.85), so 1.33 Shane played Radio City and who knows how many other theaters with its top and bottom cropped for a more rectangular image (which obviously didn’t dissuade Oscar voters).

This history and the fact that a 1.66 image completely fills a TV screen were the motivators for a kind of alternate-universe rendering, despite the fact that Shane has been shown everywhere in 1.33 for a few decades. George Stevens Jr., who, believe me, would never do anything to desecrate his father’s legacy, nonetheless OK’d the 1.66, whereupon Jeffrey Wells of Hollywood elsewhere got typically mouthy about it and made comments about George Sr. turning over in his grave. Wells was rightfully on the side of purists, though not angels, and Warners punted. Sometimes you need a serial showboat to get things done, and Wells is the one person who may be a bigger one than U.S. Reps. Darrell Issa and Peter King put together. (Truth to tell, I wish the Blu-ray included both versions because frame blow-ups I’ve seen of the 1.66 rather please my eye.)

For a movie with a folkloric hero, Shane has a kind of folkloric history. For one thing, it has the signature role of underrated lead Alan Ladd’s career — a performance of such stoic perfection (whether it was partially “made” in the editing room or not) that Stevens later wanted Ladd to play Jett Rink in Giant. (And speaking of alternate universes, I would love to see that version without giving up rights to keep on having James Dean immortalized in the role). Ladd survived predominantly mediocre pictures to become a huge star for about 15 years and a minor one for about seven years after that, which spurred Jack Warner to call him the most amazing phenomenon in movies or something close to that. It’s invigorating to see Ladd have his one great place in the sun (to keep it in the Stevens vernacular), though I love him as well in star-maker This Gun for Hire and his posthumously released swan song The Carpetbaggers (he was a decent Jay Gatsby, too). To my mind, he carries the unrealized-love part of the story opposite a borderline whiny-voiced Jean Arthur, who in her last feature has always seemed to me to be the film’s one casting weakness, though that’s too strong a word. Otherwise, it’s tough to imagine anyone bettering Van Heflin (oppressed homesteader), Brandon de Wilde (never a more idiosyncratic child-actor performance), Jack Palance (still Walter Jack here as a hired gun) and Emile Meyer (the story’s heavy-with-a-cause cattle baron).

The other semi-folkloric component here is the way that Shane overcame severe studio resistance over its box office chances — even all-out insulting their expensive picture by trying to unload it to Howard Hughes at RKO (you can almost imagine the congenitally tasteless Hughes shooting and inserting new scenes with Jane Russell as a saloon girl). When the deal fell through, Paramount was merely left with a critical success that became one of the biggest smashes in its history — one with a Pulitzer-winning screenwriter (A.B. Guthrie, Jr.) and probably the most beloved score Victor Young ever composed next to the one for Around the World in 80 Days. Had it not been for From Here to Eternity, this probably would have been the year’s Oscar picture. As it was, Stevens won directorial Oscars for the films that immediately preceded and followed it.

My own history with the film is more complicated, starting with the fact that Shane is one of the two 1953 releases that turned me onto the movies at age 6 (The Caddy was the other one, though chalk that up to my Martin & Lewis mania). But, yes, it is languorous and almost a little lumpy in its construction, enough so to make me understand why my NYU professor and Western expert William K. Everson didn’t like it (though Bill also thought Shirley Temple’s The Blue Bird was better than The Wizard of Oz as well, and try going to the bank with that one). Shane is a movie of high points, but the high points number maybe 20, and I don’t think I’ve enjoyed it as much as I just did on this fresh viewing since 1959 when, on my 12th birthday, I saw it in a bizarre re-issue double bill (for which Paramount was famous) with Hitchcock’s The Trouble With Harry. It’s a “demonstration” Blu-ray, and the commentary by Stevens Jr. and Shane’s late associate producer Ivan Moffat (carried over from the standard DVD) is top-of-the-line.