Seven Days in May (Blu-ray Review) 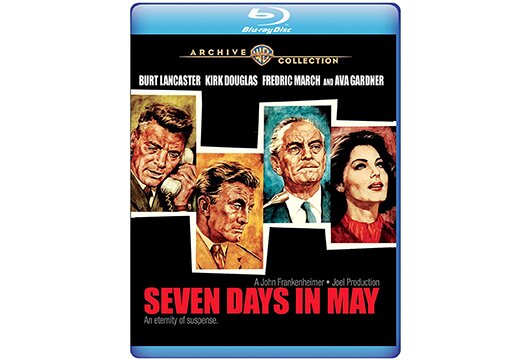 Though plotting specifics differ markedly and sometimes in polar-opposite fashion from current headlines, you have to believe that the political time is right for a remarkably clean high-def transfer of John Frankenheimer’s Seven Days in May — which speaking as one who saw it the day after it opened locally-to-me in 1964, now seems more potent than it ever did. Released just a couple months after the JFK assassination and only a couple weeks after Dr. Strangelove hit theaters, its portrayal of a once heroic but gone-rogue general — and the ensuing institutional threats both his followers and his personal crack-up present to governmental stability — make this adaptation of the Fletcher Knebel-Charles W. Bailey II novel far more a movie of today than the incessant panderings to the zit demographic that dominate multiplexes this time of year. With the word “collusion” even popping up in Rod Serling’s screenplay, you have to believe Warner Archive’s Blu-ray timing is no coincidence.

Warner home release or not, Days originally went out in theaters under the Paramount banner, but because also-involved Seven Arts scored ancillary rights, the original distributor is no longer an exhibition factor (I do miss seeing the Paramount mountain at the movie’s beginning). In terms of filmmaker “we wish to thank” acknowledgements, we’re looking at director who knew how to start at the top: because JFK was such a huge fan of 1962’s The Manchurian Candidate he gave Frankenheimer permission to shoot Days’ opening protestor riot in front of the White House (after flying off for the weekend to Hyannis Port) and for the production designer to photograph the interiors so that a replicating set could be constructed. (Interesting that Kennedy loved Candidate, while Nixon later loved Patton.) The opening fracas is the one major physical scene in the picture and has a different tone from the rest. In part, it’s because the Pennsylvania Avenue protestor donnybrook happened in significant part for real because the beefy hired extras (plucked from local gyms) got into it with some motorcycle enthusiasts also on the scene. Some of the contusions we see are on the level.

Plot-wise, these opening demonstrations are an offshoot of a Soviet nuclear treaty that has plummeted the president’s popularity something close to Harry Truman’s near-subterranean levels after his 1951 firing of vainglorious Douglas MacArthur — one of the real-life figures who partly inspired the disloyal army general that Burt Lancaster plays (the Air Force’s Curtis LeMay, whose itchy “bomb them” finger used to give Kennedy fits, was another creative muse). You don’t have to have much of an imagination to see how Lancaster’s fictional General Scott and the more recently off-his-trolley Michael Flynn might enjoy breaking bread at a joint that serves dripping roast beef in all blood types. The key difference here is that the president (Fredric March) is calm and reasoned (if plenty shaken), while giving the crucial impression that he’s likely cracked a book or two. Rounding out the casting Big Three as Lancaster/Scott’s aide is Kirk Douglas, who has the movie’s best role but also the toughest — because his character must credibly maintain his loyalty to the military while coming to realize he must put a figurative blade between the shoulders of a superior he once revered. As a side issue, Blu-ray clarity proves beyond a doubt that Douglas had seriously cool hair atop the apparent willingness to let some makeup guru blow-dry it for an hour after applying a liquid-cement dressing.

Through scattershot hints that extend even to an upcoming running of the Preakness, Douglas gets wind that a military coup is imminent, a situation that provides opportunities for all kinds of great character actors to sink their teeth into all kinds of DC types (the in some ways pompous advisor that George Macready plays rings especially true). I’ve never quite understood how Edmond O’Brien snared a supporting Oscar nomination as a dipso senator and March confidante, but he’s an actor I always liked, so why fight it? This time around, I was most taken with March, whose could not possibly be better in a non-showy role. On the long deceased Frankenheimer’s typically standout voiceover commentary carried over from a previous rendering, he says March was one of the two best actors with whom he ever worked. (I think he said on the commentary for The Comedian — a “Playhouse 90” episode where he’d previously worked with Serling — that Mickey Rooney was No. 1.)

Also un-showy but subtly effective is Martin Balsam as March’s key aide, and Frankenheimer notes how much the actor contributes to one major scene via simple body language while sitting in a chair placed deep into the background of the frame. There are all kinds of other familiar faces that all-out belong in a political thriller of that day: Hugh Marlowe, Whit Bissell (who must have put in more career hours than the Grateful Dead), Richard Anderson, John Larkin and so on; John Houseman (first time I ever saw him and the only major screen role he ever had until his Paper Chase Oscar turn) scores in a couple scenes as a slippery admiral, but for reasons I’ve never ascertained, he was unbilled. In what I always thought was the movie’s one shaky link, the filmmakers even got Ava Gardner away from her prized front-row seats at somebody’s bullfight for a week of work as Lancaster’s onetime mistress and repository of heavily germane intelligence.

Most of the Lancaster-Douglas screen pairings were, in equal measure, heavy on flamboyance, Gardol-ed teeth and chin dimple — proof offered by, among others, by the longtime team’s swan song Tough Guys, which Kino just brought out on DVD and Blu-ray (amazingly, it’s never gotten a DVD release until now). Here, they’re playing it straight, and we always feel we’re in the hands of total pros. Interestingly, Lancaster was a real-life political liberal, so he must have had some fun here (this was the third of five movies he and Frankenheimer made together, including Birdman of Alcatraz, which is one of the hallmark Burt performances).

I don’t know how much of a box office performer Days was, but it couldn’t have matched the success of the book, which went to No. 1 on the New York Times bestseller list well after Frankenheimer & Co. secured the rights (that must be quite a feeling). In any event, it would be unimaginable today for a major studio to mount an early-year release with this kind of subject matter and such an A-plus cast, but times change, and during the era Days was made, there were all kinds of things we took for granted, starting with pleasant airline travel. An added virtue here is the semi-raw look cinematographer Ellsworth Fredericks gives to some of the scenes, which, without overstating the point, reminds me a little (without overstating the point) of the great Robert Drew early ’60s political docs that Criterion brought out a little more than a year ago for one of the best Blu-ray packages ever.