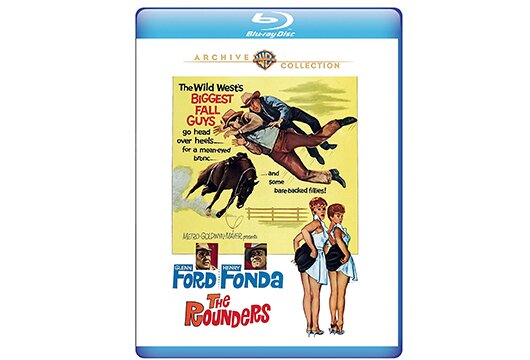 After re-viewing this contemporary-to-its-time Western tickler in tandem with a fresh look at You’ll Never Get Rich, I feel as if I’m emerging from “Mild Week” in terms of substance and cinematic form (though what fool would deny that physical presence of Astaire and Hayworth in the latter is form-id-able?). But given that The Rounders has always been an affably outdoor Panavision mix of hooch-loving horses, out-of-work strippers and, above all, easygoing casting synergy, it’s a not-bad way to salvage 84 minutes when the real-life political world is falling apart. For anyone who covets a sweeter-smelling brand of manure than the past half-year’s adventures in staff vetting, this could be the place.

Except for the one blockbuster every 18 months or so (see Doctor Zhivago or 2001) specifically designed to save a fatally floundering studio from itself and fast-changing 1960s box office demographics, the only MGM releases capable of even picking up a tiny cult at the time seemed to be those made when no one was looking. By 1965, Rounders leads Glenn Ford and Henry Fonda were still respected big-screen names — and if your eyebrows are on the rise over the first half of this assertion, note that Ford had been exhibitors’ No. 1 box office attraction as recently as 1958. Even so, the movie was as much under the radar as most other MGMs of the day, and in my Midwest hometown, The Rounders failed to get a downtown first-run booking and was instead relegated to premiering at neighborhood theaters the way Roger Corman’s AIP’s regularly did. Some of the New York reviews, though, were very good, and though I can’t find anything on Google, my memory residue (which is what I now have instead of a memory) tells me that it ended up making at least one major publication’s 10-best list. What’s more, one has to assume that the picture was disproportionately popular in the West and Southwest as a BYOB drive-in favorite (not that I’m encouraging this).

Ford and Fonda, whose jeans and overall hygiene appear to be slightly more shipshape than their characters’ job description and mishaps might lead to in real life, play horse wranglers who keep hiring on as work slaves to fancy rancher Chill Wills, the kind of four-flusher who might spend an hour or more wearing you down when bartering over the price of a chaw. The reward for this is getting repeatedly bucked into near-Palookaville, though it’s Ford who always seems to be on the wrong end of the horseshoe as Fonda gets the wincing reaction shot. Ford’s uttered fantasies about the means by which he hopes to dispatch his dominant roan nemesis (think dog food factory, for one) still elicit snorting nasal passage guffaws at the precise points when the movie can use them.

You don’t have to dust off your old paperback of Andre Bazin’s What Is Cinema? to discern that not a whole lot happens here, but between the leads, the outdoor vistas, familiar Western faces (Wills, Edgar Buchanan, Denver Pyle, Barton MacLane) and occasional surprise — Kathleen Freeman in a role with at least suggested romantic dimension? — the picture gets by. Late in the story, Ford and Fonda encounter a pair of Vegas performers (term used loosely) played by Sue Ane Langdon and Hope Holiday and whose car has broken down on the highway. One thing leads to another and then to a foursome skinny-dip, which then results in the ladies’ lost clothes and the quartet’s trip into the nearest rural eatery. Doing so necessitates some quickly improvised apparel modification that doesn’t work all the way — which is also something you can say about a presumed foolproof scene that falls a little short due to wheezing censorship dictums of the day. Had The Rounders come out in 1967 instead of 1965, director Burt Kennedy (whose filmmaking never matched the super scripts he wrote for Budd Boetticher) could have gotten a lot more of Langdon-Holiday bare-behind embarrassment than he does, though even at the time he could have gotten more. I suppose it’s an auteur-antics footnote that in ’67, Kennedy’s The War Wagon featured an exposed-posterior shot of Kirk Douglas — or wait (memory residue strikes again), was this only in the European cut?

Once again, the asking of such questions proves that art is my life. Which means it’s only right, by way of Rounders’ defense against its limitations, that Ford, whose career was then in or beginning a fast fade, is really funny here.

New on Disc: 'The Rounders' Blu-ray and more …