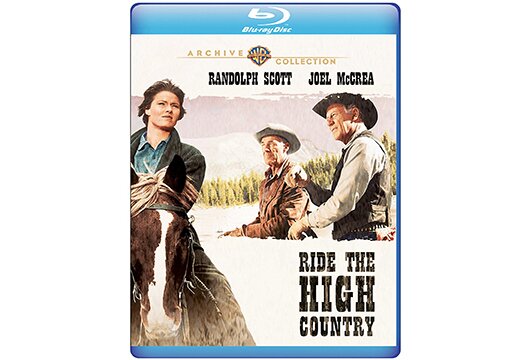 By now, the story is fairly well known. New management took over at MGM in an era where “new management” was about become the studio’s middle name, and the new brass didn’t like what (critically speaking) became Sam Peckinpah’s career-maker and a movie not a few still think is the best he ever made. This is also how a Western that almost everyone likes — in Alternate Oscars, film historian Danny Peary picks it as the best American release in a very strong movie year — ended up playing at the bottom of first-run double bills. A not dissimilar fate befell MGM’s John Ford swansong 7 Women four years later, though one has to say that a picture about neurotic women missionaries in 1935 China was a more understandably tough sell in the then-imminent Blow-Up era than a Western starring a pair of genuine bonafides should have been in 1962.

After an acclaimed and generally happy tenure in television, Peckinpah was coming off a terrible feature-debut experience with The Devil’s Companion (it would, uh, not be his first), and Country producer Richard E. Lyons fought for his hiring. Lyons’s filmography isn’t much (one of his other good pictures, The Rounders, is also new on Blu-ray from Warner Archive), but he has to be regarded as one of the heroes of a piece whose existence sometimes seems like a miracle. Any opining about the here-and-there raggedness of Country (and there is a little — here and there) has to be tempered with the reality that a) Peckinpah came late to the project after leads Randolph Scott and Joel McCrea already had been cast; b) Peckinpah and writer buddy William S. Robertson, on a dime, reportedly had to do an uncredited massive rewrite of N.B. Stone Jr.’s credited script; and that c) Peckinpah shot it in just 28 days amid weather problems. Or, more literally, Lucien Ballard shot it — on his way to becoming the cinematographer most associated with Peckinpah (The Wild Bunch alone would do that for you).

In a wonderful burst of unexpected late glory, Scott (his final film) and McCrea (his final one of note) play long-ago lawmen put out to pasture by changing times, with the former a kind of carnival grifter these days and McCrea unenthusiastically employed by bankers to supervise a relatively meager gold transport from a California mining camp well after the Gold Rush has been relegated to past tense. McCrea then hires his old buddy, who in turn brings on a callow youth for the ride (Ron Starr) — though the kid does have the good sense to fall for the lemme-outta-here daughter of a pious religious fundamentalist (Mariette Hartley in her screen debut) they meet while riding up to the camp. Nonetheless, she’s engaged to one of the miners (a fairly presentable James Drury) and runs away to join the three bank employees as makeshift escorts — but hasn’t counted on Drury’s brothers, any one of whom could be mistaken for the Missing Link. Can you imagine Warren Oates, L.Q. Jones and John Davis Chandler in the same gene pool? Well, neither can she, and no good can come of this half-baked union.

As savvy Sam scholars Nick Redman, Paul Seydor, Garner Simmons and David Weddle note on the Blu-ray commentary, Peckinpah’s many virtues extended to the aptness of his characters’ costumes. Thus, we can see that whereas McCrea (enormous personal integrity or not) has gone to sartorial seed with frayed cuffs, the much better-groomed Scott appears to have a “dandy” dimension that indicates an appreciation for the good life, even though his personal fortunes aren’t any or much better. Not unpredictably, he (and Starr) smell the gold, hoping that straight shooter McCrea (in both senses) might eventually agree to join them in making off with it. As it turns out, there’s about as much chance of this as Hartley harmoniously consummating her marriage in the mining camp when (for starters), the ceremony is scheduled to take place in a brothel and conducted by a heavy-drinking justice of the peace. Edgar Buchanan plays him, and for fans of familiar-faced character actors, this movie is something of a funfest: we also get not quite gangsters-of-love Percy Helton and Byron Foulger playing father and son (a provocative touch).

The leads’ deliveries of what sounds like prototypical Peckinpah dialogue is a joy from the beginning, but when the quartet reaches the camp at roughly the film’s half-way point, matters shift dramatically into higher gear. From this point on, the picture does indeed become as good or better as anything the director ever did. (For the record, The Wild Bunch would be my No. 1, leaving it to Country to ace out — by a little — The Ballad of Cable Hogue, Straw Dogs and Junior Bonner). Peckinpah was one of those self-destructive, demon-packed geniuses like Nicholas Ray, with a small-ish big-screen output in the great scheme of things but with a striking number of films that ranked with the best of their respective years. I’ll also note that if there’s a bigger rip-your-guts out final scene as the one here, it does not easily come to mind — thanks in part to a George Bassman score that can occasionally be too much but which does have a powerful main theme (where it counts). I’m still trying to get over the fact that Bassman had also written Tommy Dorsey’s longtime theme song I’m Getting Sentimental Over You.

In my town, which was a typical example, Country didn’t rate a downtown theatrical booking at the time — even as The Man Who Shot Liberty Valance and Lonely Are the Brave (two other twilight-time Westerns that came out in the first half of ’62 as well) did. In terms of box office currency, that duo boasted marquee names that meant more at the time than Scott and McCrea, and I’m guessing (can’t recall) that Country got local bookings at one of my later drive-in haunts before I was old enough to drive or into a neighborhood theater right next to a White Castle that played a lot of lesser MGMs and a lot of Roger Corman AIPs. As belated compensations, I did eventually get to book fresh 35mm prints into the AFI Theater back when I was programming: once in a double bill with Stagecoach in a Western series that predictably died with Kennedy Center audiences — and later in another twofer with the Randolph Scott-Budd Boetticher 7 Men from Now. At that one, NBA Hall of Famer and U.S. Sen. Bill Bradley flabbergasted sports-junkie staffers by showing up as a paying customer, God bless him).

The spiffed-up print here looks the best of those I’ve seen: great more often than not and easily acceptable in the frequent autumnal fading foliage scenes, the kind of footage that was never abetted by Metrocolor’s tendency to fade to autumnal orange as a matter of course. Carried over from the old DVD is a lovely Redman-directed interview of Sam’s sister Fern Lea Peter, who seems like a wonderful person and certainly (in her brother’s case) a knowing one. With a Straw Dogs Blu-ray upgrade coming soon from Criterion and a Kino-announced release of Junior Bonner announced for summer, we’re in a rich home-media period for Peckinpah’s legacy. And this is by no means to exclude Walmart’s recent exclusive DVD of his critics’ favorite “The Westerner” (all 13 TV episodes), which NBC managed to kill by putting it up against “Route 66” and “The Flintstones.” On the other hand, this Brian Keith showcase, which also gave Warren Oates some early work, was instrumental in Peckinpah getting hired for Country, so you never know. Which, in the case of Country’s rep itself, ultimately proved true as well.

New on Disc: 'Ride the High Country' and more …