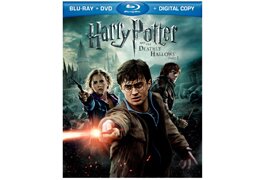 ORLANDO, Fla. — "Harry Potter" filmmakers and cast gathered Nov. 11 at the Universal Studios theme park designed around their iconic film series to discuss the disc of the final  installment in the series and reminisce about a decade long journey.

"I can't put it into words really," said Rupert Grint (Ron Weasley). "It's been kind of my childhood."

"It was a pocket of something magical," said Jason Isaacs (Lucius Malfoy).

"You know people have been saying to me today, 'Oh, is it sad that it's all over?' And I don't know if sad is the right word," said Warwick Davis, who plays dual roles in the series of the goblin Griphook and Hogwarts professor Filius Flitwick.

"It's sad that I won't be getting the paychecks," he joked."The thing that might be sad is not seeing everybody."

"You get a code inside the DVD and you go to I don't know what you call it … a portal … you go to a portkey," Davis joked.

The panel also discussed the extra features on the final disc.

"Each of the women characters is strong in a different way," she noted, adding Luna is true to herself, Hermione uses her brains and Jenny Weasley is "fiery."

In answer to a comment about being a role model to other little girls, she said, "I love to hear those stories."

Warner Bros. Home Entertainment executives were all smiles at the event as they checked sales numbers for Harry Potter and the Deathly Hallows — Part 2 the day of release and watched as the "Today Show" broadcast from the park and talked about it.

By 10 am Eastern they knew they had a hit.