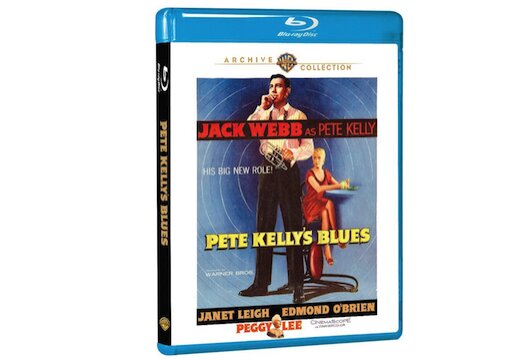 The 1954 feature film version of Dragnet proved that audiences would shell out for a more violent version of what they could see every week on NBC for free, but the true big-screen baby of jazz lover Jack Webb’s career spun off from another radio show (this one short-lived) from earlier in the decade — this one about ’20s Kansas City musicians so distracted by encroaching mob muscle that there isn’t a whole lot of time left for any fun with flappers. And a big screen it was, too, with Webb working a 2.55:1 canvas in those still embryonic days of CinemaScope.

The cult attached to Webb-the-actor has something to do, I think, with the suspense factor over the amount of time it’s going to take him to get riled up and finally blow (often over someone’s rap sheet). Though Charlton Heston would likely garner a vote or two, Webb probably displayed the most constipated public persona of any nationally known public figure with whom the boomer generation grew up — at least this side of Richard Nixon, who was in a class by himself. But in this case, cast as trumpeter and band leader Pete, Webb’s dyspepsia is fairly restrained, save for a handful of crowd-pleasing diatribes against those who hack him off, delivered with the familiar staccato of Sgt. Joe Friday berating some arrested punk who’s polluting the precinct. These sporadic pyrotechnics constitute his main emotional release in Blues — because even with Janet Leigh as his co-star here, it’s impossible to buy Webb in a romantic situation, despite the fact that his real-life wives included Julie London and onetime Miss USA (turned actress) Jackie Loughery.

Still, the movie has enough “something” to have made one of Martin Scorsese’s published Guilty Pleasure lists; call it a love of jazz or love of keenly composed widescreen set pieces for their own sake or the dividends paid by one of the more oddball-ish casts of the era. In one movie, we get Leigh as a party-girl whose means of support aren’t very visible; Edmond O’Brien as a Prohibition thug not too different from the one the hood he’d soon play for laughs in The Girl Can’t Help It; Andy Devine, memorably playing it straight, as a cop; Ella Fitzgerald as a roadhouse singer; Lee Marvin, who’d excelled in a 1952 “Dragnet” episode, as Kelly’s clarinet player; Martin Milner, who’d later star in the Webb-created “Adam-12,” as another band member (a hothead); and Peggy Lee, rather deservingly Oscar-nominated, taking a page from the Claire Trevor-Key Largo songbook by playing an alcoholic chanteuse and O’Brien mistress who eventually ends up in one of those places a step or two above a Frances Farmer rest home. The 1955 movie summer when I turned 8 was a huge one for Lee because Blues came out almost piggy-backed with Disney’s Lady and the Tramp, for which Lee composed some memorable tunes that much later helped her win a lawsuit over the Mouse over her share of the video market cheese during the VHS era. In fact, I can remember seeing the coming attraction for Blues when I was taken downtown to the RKO Palace to see Lady for my cousin’s 7th birthday, which, if anything, actually made the bigger impression. (In retrospect, I should have been kinder to the kennel contingent.) Eventually, Blues did enough business to be held over for a second week — presumably without much help from the said-to-be-faux documentary Quest for the Lost City, which seems to have disappeared off the face of the earth, though I dug it as a kid.

Other than a few crackling dialogue exchanges, the Richard Bare script for Blues is mostly functional, though before dying too young he worked on a lot of movies I like, including Miss Tatlock’s Millions, which is probably my favorite comedy of the postwar ’40s. But throughout, Webb seems to know what to do with the Scope ratio in the only anamorphic film he ever directed — including the lovely decision not to ruin two great Fitzgerald numbers with a lot of cutting, the way George Sidney messed up what were otherwise Frank Sinatra’s best-ever screen vocal performances in Pal Joey (unforgivable). Ella in tight close-up singing “Hard-Hearted Hannah” plus the title tune are, for me, among the most resonant movie moments of the era — and just because Lee is playing a (sympathetic) lush doesn’t mean that the screenplay calls for her to have a lousy voice. As part of a significant promotional campaign that I still recall fairly vividly, Decca (which still had Fitzgerald and Lee under contract, though not for much longer) released an Ella-Peggy tie-in LP to go along with Columbia’s official soundtrack album. (Later, when the property spawned a soon-canceled TV series in the late 1950s, the newly formed Warner Bros. records issued a soundtrack to it — an alternative to their Edd “Kookie” Byrnes recordings of the same period and Webb’s own waxing of, no kidding, "Try a Little Tenderness.")

Webb-the-director goes to town with the finale, which is set in one of those light-show dancehalls with a revolving ball on the ceiling (a la They Shoot Horses, Don’t They?). It’s such a stunning set-piece that it inspired me, back in my AFI programming days, to double Kelly with Orson Welles’ The Lady From Shanghai, which has its own visual fireworks at the end involving darkness and light. Though Kelly was shot in dreadfully fade-prone Warner Color, the opening credits also read “print by Technicolor” — which means the color values remained intact for a wow of a studio print that already got points for being in surprisingly potent early stereo. I don’t think anyone who ever saw this AFI presentation ever forgot it, but I have to say that this Warner Archive Blu-ray comes as close to replicating the experience as is possible in a non-theatrical showing.

Still, there was one bonus kicker that no home showing could ever match: When the film ended with Webb’s much-parodied “Mark VII Limited” logo for his eponymous production company (the one with the grimy-handed stonemason pounding a stamp with a hammer), some guy in a back row getting something like an LSD flashback yelled out, “Oh, no!” to a lot of communal laughter.