Out of the Past (Blu-ray Review) 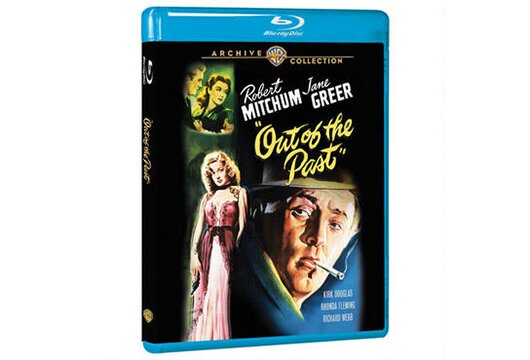 With that cigarette in Robert Mitchum’s mouth plus a more symbolically smoky rendering of its gun-happy femme principal packing heat (both senses), the Warner jacket art for one of the most emblematic film noir dramas ever assembled closely resembles that of the original poster — the one I’ve had hanging in eight apartments or homes for upwards of 35 years. This last point indicates the enthusiasm on my part for a movie whose rep has grown exponentially since the 1970s, but this viewing (and the Blu-ray part of the experience really helps) has probably been my most satisfying journey to the Past of them all. This is just about everything a noir screen experience should be, even down to a title that has really plays on the imagination.

Cat People’s Jacques Tourneur directed without a stumble from a script by Geoffrey Homes (aka Daniel Mainwaring) that’s much tighter than the one for the loose and only lukewarm ’84 remake Against All Odds; beyond that, the casting could not possibly be better. It’s sometimes easy to forget that Mitchum, like Burt Lancaster, occasionally played chumps earlier in his career — guys who probably could have remained on the straight and narrow had they not taken up with the wrong kind of woman (poor Mitchum would do it again with Otto Preminger’s almost-as-definitive Angel Face). The woman here is Jane Greer, an actress who played femme lead Rachel Ward’s mother in Odds (a character not in this earlier version), and my reaction to her, particularly in this film, is always colored by a) the fact that people thought my mother looked a little like Greer; and b) Greer was married to the much older Rudy Vallee in real life when she was even younger than she is in this movie, which raises some “OK, tell me about it”-type questions. (H.B. Warner must have been off-limits.)

The Mitchum character’s employment trajectory begins off-camera in New York City (he’s been a private eye), but the vast concentration of the story is in rural California, San Francisco, Lake Tahoe and Acapulco (Greer’s haunting grounds are in the last three, and, yes, she really gets around). The movie is really good at contrasting the comparable peace of mind Mitchum finds operating a service station in the sticks with a nearby head-on-straight girlfriend (Virginia Huston, who later played Jane to Lex Barker’s Tarzan) — plus a good fishing stream to ease his world-weariness. But even without the title, we sense that Mitchum is haunted by the past from which he’s hiding — after falling for the woman he’s been hired to find. Kirk Douglas plays the former’s slick employer in one of the dimpled one’s great early performances from only the second year of his screen career. You can’t blame Kirk for being chapped because Greer stole a lot of money from him (a disputed accusation) and hit him with one of four bullets she fired his way (the truth to this charge isn’t too iffy).

Up through the early ’50s, Douglas had few or no peers in playing heels, and here it’s a case where cheating on taxes is about the most benign thing the smoothie he’s playing here does. He does, of course, have an understandable right to be chapped that Mitchum has done a lot more than failing to execute his assignment — but the manner in which he seeks revenge (though it probably rates some style points) goes beyond just getting even. Douglas is fantastic but rarely gets the credit his two co-stars routinely get here. Even his hairstyling (there must not have been any Vitalis left in Hollywood after this production wrapped) is on the button.

RKO negatives have been through the ringer ever since the library was one among the first to show up on TV, and there are sporadic moments where you can see some imperfections on the image, though basically the result is a noir-ish banquet. This was the last time director Tourneur worked with Cat People cinematographer Nicholas Musuraca, who worked on big-name pictures but also Tim Holt Westerns (which were usually excellent of kind) and even TV’s “F Troop” at the very end. Almost all of the big-city scenes (which contrast effectively with more pastoral material) take place at night, and Musuraca really shows us what noir was about — so much so that one could see just this single movie and understand what all the film literature the genre has inspired is all about. James Ursini, a name synonymous with noir reportage, does a commentary.