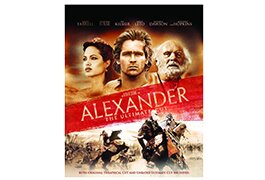 Director Oliver Stone has pieced together yet another version of his 2004 film Alexander, which will be released on Blu-ray Disc June 3 (order date April 29) as Alexander: The Ultimate Cut — 10th Anniversary Edition by Warner Bros. Home Entertainment.

The theatrical cut, which also is included on the Blu-ray, runs 175 minutes, and in keeping the film under three hours, Stone was “unable to achieve a vision that stretched beyond the boundaries of an ordinary film,” according to the statement announcing the new version.

“Originally, I did my best to deliver a thrilling movie on a very brief post production schedule, but was frustrated in the end because I wanted the material to tell Alexander’s story with greater nuance and complexity,” Stone said.

For the 2005 DVD release of the film, Stone created a director’s cut that was eight minutes shorter than the theatrical cut. In 2007, Stone re-edited the film into a 214-minute epic dubbed Alexander Revisited: The Final Cut that was released on DVD and Blu-ray.

Stone said The Ultimate Cut more closely adheres to the outline of his original script. The film runs 31 minutes longer than the theatrical cut, but is eight minutes shorter than the Final Cut and different in structure.

“I’ve tried throughout this process to achieve what I believe is the appropriate balance between the inner and outer journeys undertaken by this extraordinary man,” Stone said. “Free from earlier constraints, I’ve continued to pursue this great story, and I think I have at last achieved a film that tells a story as it has never been told.”

The Blu-ray, listed at $49.99, also includes The Ultimate Cut on Digital HD UltraViolet, as well as a new documentary The Real Alexander and the World He Made, which reveals how Alexander the Great’s vision of uniting the East and West helped shape our modern world. Other extras include additional featurettes, a commentary by Stone on the Ultimate Cut, and theatrical version commentary by Stone and historian Robin Lane Fox.