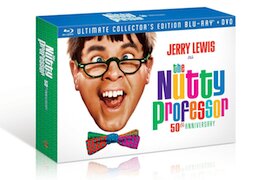 In something akin to that warm feeling of assurance we get when, say, Duke Wayne finally takes over the cockpit controls in The High and the Mighty, the sudden relaxer in Jerry Lewis’s greatest solo comedy comes early on when the movie gives us a shot of the star/director in his trademark black shoes set off by white socks. In other words, we know we’re in familiar hands, and the world is going to be all right. Plus, once nerd-royalty Prof. Julius Kelp does his Jekyll-Hyde morph into Hefner-heyday swinger Buddy Love following some Doc Jekyll-type substance abuse in the campus lab, we’re additionally treated to the equally trademark patent leather Jer-hair, which must be (as sheens go) one of the reasons Blu-ray was invented. So here we go with the one movie where the famously erratic funnyman put it all together — or came so tantalizingly close that any arguable shortcomings don’t ultimately matter.

Accordingly, Warner Bros. Home Entertainment has gone a couple continents’ worth of extra miles with a pricey release that also includes standard DVDs of two more Lewis features plus a CD of Phoney Phone Calls 1959-72, which were kind of a Lewis-the-early-audiophile’s invasion of "Candid Camera" territory to call unsuspecting victims out of the blue to have a little fun at their expense. And that’s just setting the table. A meticulous record keeper and personal archivist who probably still has the menus for his son’s Bar Mitzvahs, Lewis and his personal input have packed the collection with a new featurette on himself; Nutty storyboards; excerpts from the movie’s cutting script; trailers; behind-the-scenes footage and much, much more. None of this trumps the main event itself — which is not to deny that if someone had sent me all this material during my childhood or adolescence, I would have faked illness to stay home from school. Yet beyond its other virtues, Professor is maybe the greatest-looking movie Lewis ever made, with the very arguable exception of Artists and Models opposite Dean Martin, so this is a smashing visual experience even before we get to the inspired va-va-voomish casting of Stella Stevens in one of the two standout roles of her underutilized career.

Unlike the better-than-expected Eddie Murphy Prof remake from 1996, which was predominantly a showcase for its star’s super keen mimicry skills, the Lewis version is heavy in subtext that extends well beyond its characters — that is, the tension between old values finding themselves under barrage by the swinging ’60s under the anti-Eisenhower of all presidents up to that time. Released in the same summer of 1963 where we had to convince ourselves that the unambiguously full-octane Ann-Margret could be a high school student in Bye Bye Birdie, Lewis’s film likely couldn’t have come out much later in the form that it did. ABC-TV’s “Hootenanny” was already airing on Saturday nights, and the Berkeley Free Speech Movement was less than a year-and-a-half away; the idea of college students sneaking away to a next to off-limits nightspot called the Passion Pit — or swooning to the great Les Brown and His Band of Renown at the big campus dance — would soon seem quaint. There’s even a script reference here I’d forgotten to folk music (soon to be itself supplanted by the British Invasion), so Lewis & Co. may have sensed the pop-cultural change on the horizon.

Though American film criticism was at such low ebb in 1963 that I don’t recall anyone even bringing the issue up at the time, the biggest question here has long been whether Lewis is aping ex-partner Martin in the Buddy Love sequences. I never once believed this was true, and the supposition has been discredited to enough of an extent that it surprises that people keep bringing it up. There was nothing in Martin’s professional or personal demeanor to suggest the overbearing arrogance of the Love character; Dino was all loosey-goosey mangling “Stranger in Paradise” into “Take My Hand, I’m a Stranger in Steubenville” or Al Jolson’s “Sonny Boy” into “Climb Up on My Knee, Sonny Tufts.” Even Frank Sinatra, who could be arrogant, rarely went to the Love-ly extremes seen here, at least in public. I think what Lewis was doing is channeling the two sides of his own public persona consciously or unconsciously — and if it were the former, you have to wonder if any performer has even bared his soul to such a degree of self-knowledge in all of movie history. Professor Kelp is the lovable Jer, while Buddy Love indulges the side that caused so many to term Lewis as an egomaniac.

Watching this all play out is more fascinating than ever, though I admit that never before grasped (and I saw Professor in ’63) the degree of emotions we can read on co-star Stevens’ face as she goes back and forth from the naively vulnerable to the all-knowing hit-upon beauty to one simply stunned by all that happens once Kelp ingests love potion No. 1. The actress is superbly directed here, though, as was often the case, she didn’t need the overdose of makeup she wears in the club scenes. (In her other indelible movie role, as the Western prostitute in Sam Peckinpah’s lovely The Ballad of Cable Hogue, she sported a more natural look that hardly detracted form her babe-dom.) Stevens’ character — also named Stella, which gave Lewis the opportunity to recycle Victor Young’s great “Stella by Starlight” from The Uninvited in a jazzier rendition — has her own emotional problems as well, and the movie gives them respect.

Many moments here are pure cinema and communication-by-camera, and if anyone wants to belittle the French for paying more heed from the get-go than anyone did at the time from Lewis’s own country, he or she is welcome to Under the Yum Yum Tree, The Wheelers Dealers or any more of the radio-with-pictures that constituted 1963 Hollywood comedy (It’s a Mad, Mad, Mad, Mad World and Donovan’s Reef were other major ’63 exceptions to the norm). The set’s other Lewis inclusions are the previously released The Errand Boy (fairly high-end Jer) and Cinderfella — which as much of a slog I find Rock-a-Bye-Baby to be, has to be the worst of the generally ticklish Lewis teamings with director Frank Tashlin. This said, I noticed that the new Warner rendering of the inverted fairy tale is significantly richer and more vibrant looking than the old Paramount DVD, which itself was a pretty snappy rendering of what is admittedly among Lewis’s greatest lookers. One thing: both it and Professor have key scenes that take place at dances backed by, respectively, Count Basie and Les Brown — all this while their title characters are in the midst of a major physical transformations. Gotta wonder if Cinderfella (1960) put any ideas in Lewis’s head.

New on Disc: 'The Nutty Professor' and more …