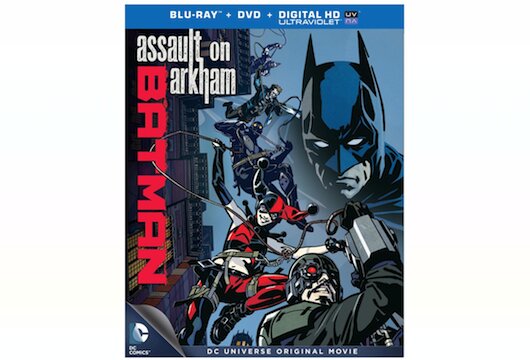 SAN DIEGO — Director Jay Oliva got the script for the animated Batman: Assault on Arkham and told producer James Tucker he wanted to direct this film a little differently than he normally does.

“I want to direct this like a Guy Ritchie, Steven Soderbergh Ocean’s Eleven film, where it’s a little over-the-top, a little cutty on the editing style, a little bit more stylistic,” Oliva said July 25 at the 2014 San Diego Comic-Con International.

Based on the Arkham Asylum video game, the animated Batman heist movie debuted early digitally July 29, and Warner Bros. Home Entertainment will release it on DVD and Blu-ray Disc Aug. 12.

“The fact that it’s set in the Arkham Asylum universe makes it very unique to what we’ve done in the past,” Oliva said.

Oliva said he tried to match the look and feel of the Arkham Asylum movie with how it was in the video game.

“I wanted to make sure that when you watch this film, it seemed like you’re playing the game,” the director said. “At the same time, I didn’t want to make a commercial for the game. I wanted it still to be a cinematic adventure.”

Oliva said he also matched some of the moves that Batman does in the video game with the moves in the animated movie.

“It’s very subtle, but if you watch it you’ll see the little nuances in there,” he said.

Another key component for Oliva, and also for dialogue director Andrea Romano, was bringing back actor Kevin Conroy (“Batman: The Animated Series”) as Batman.

“He was an integral part of the voice acting for the video game,” Oliva said.

“Whenever I hear Kevin’s voice, I feel like I’m home. It’s this touchstone,” she said. “In the animated world, Kevin Conroy is as big a celebrity as you get.”

Conroy has become the definitive Batman voice in animation, first voicing the character in 1992.

“The opportunity to work on something for that long is just extraordinary, and I’m so lucky that the studio keeps coming back to me and asking me to do more,” Conroy said. “The challenge for me is to keep it fresh and not let it get stale.”