Love Me or Leave Me (Blu-ray Review) 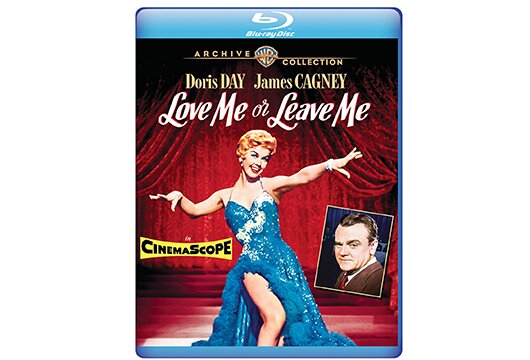 Doris Day still goes fully toe-to-toe with James Cagney in one of the most rewarding of all show biz biopics, a socko achievement given that the latter’s third and final Oscar nomination was indisputably deserved here. In fact, this is one of the essentials of Cagney’s 31-year career (not counting the Ragtime comeback after a 20-year layoff) — a list that would further include Public Enemy, Angels With Dirty Faces, Yankee Doodle Dandy, White Heat, One, Two, Three and probably even the troubled Mister Roberts, which opened about a month after Love Me or Leave Me for a great Cagney summer I recall exceptionally well.

Both then and now, I’ve never been able to understand how Day missed her own nomination for her portrayal of Broadway/radio/recording notable Ruth Etting — though I suspect that MGM might have been throwing its studio weight behind the same year’s Lillian Roth bio I’ll Cry Tomorrow, a much inferior drama-with-music that was probably considered even more “adult” at the time, even though it was marred by that slick faux realism that Leo the Lion was never able to finesse very well. Though it’s a post-Jazz Age drama that perhaps inevitably oozes ‘50s trappings, Love Me has the advantage of surprise because it’s couched as a glossy CinemaScope/color tunefest that turns out to be surprisingly tough — so tough, in fact, that the real-life Etting (who survived emotional turmoil and eventually retired to Colorado Springs in a happy second marriage) thought it went too far. This, in fact, is one of the reasons the movie is good, even if director Charles Vidor was never anyone’s idea of an auteur. (By the way: I know Paramount is 20,000 leagues below useless when it comes to its vintage library, but can someone get The Joker Is Wild out on a VistaVision Blu-ray, or are music rights issues prohibitively involved?)

On the other hand, the picture got two Oscar nominations for its typewriter groundwork, with Daniel Fuchs scoring a win for writing back when the Academy still made a distinction between writing and screenplay (the latter nomination found Fuchs sharing script credit with Isobel Lennart, who’d later pen the book for Funny Girl). Beyond a first-rate soundtrack whose Columbia LP topped the Billboard charts for 17 weeks (and was the third-biggest album by anyone from the 1955-59 period), there’s a compelling blueprint here from the relationship between dancer with wannabe-singer Etting and the crude Chicago thug who married her and managed her career — later shooting the music man (Cameron Mitchell on screen) she’d later wed. Interestingly, Day had started out as dancer herself until a bad auto mishap in her teens put an end to that.

At this point, the singer’s Warner Bros. contract was wrapping up, and she was looking for something a lot meatier than Lucky Me had been the year before (though I’ll always have a huge soft spot for her rendition of The Blue Bells of Scotland in that early-Scope boo-boo). She and Cagney had worked before in 1950’s The West Point Story, another of those antiseptic musicals Jack Warner kept green-lighting in the early ’50s while waiting for James Dean to show up. That one didn’t offer too many acting challenges, either, but Cagney obviously saw something in Day, whose only dramatic role pre-Love Me was as Klan-fancier Steve Cochran’s wife in 1951’s Storm Warning, a lurid grabber that combines A Streetcar Named Desire plot basics, a KKK milieu and Ronald Reagan as a good-guy lawman who strives to soil the sartorial non-splendor of the latter’s white sheets. After initial casting choices Jane Powell and Ava Gardner didn’t work out, Cagney apparently lobbied for her. She returned the favor by making a rare broadcast appearance (by then, Day was already a recluse from show biz glitter) when Cagney got the second AFI Live Achievement Award in 1974 on a memorable broadcast that deservingly got an Emmy.

As Martin Snyder (who, in real life, was better known as “Mo”), Cagney operates a dry cleaning business as a front for various nefarious activities (protection, anyone?) but seriously lacks the polish to play with the N.Y.-L.A. big boys when his ward-protégé-wife ends up with her name in Broadway lights and herself on Hollywood soundstages. Etting never made it much in the movies (a couple of her Warner Vitaphone shorts are included as Blu-ray extras), so there’s likely the standard kind of embellishment here that we get in nearly all of these teary rags-to-riches sagas. Still, this is one tough story, as Snyder combines scary Joe Pesci mood swings with an occasionally disorienting soft streak — and before the studio chickened out, the movie is said to have contained a scene where Snyder rapes Etting, which certainly would have been a first for a Joe Pasternak production.

Love Me’s Metrocolor is inherently muddy, but the Blu-ray does its best, while both the sound recording and the Percy Faith-George Stoll scoring got Oscar nominations, to make this an audio treat within the day’s technological limitations. As suggested by the LP’s long shelf life, the song lineup is a winner that includes one of Day’s best ballads ever (the Oscar-nominated “I’ll Never Stop Loving You”) and the show-stopping “Shaking the Blues Away” — which, to my mind, remains the signature Day movie number after “It’s Magic” (from her screen debut in Romance on the High Seas) and the superlative “Deadwood Stage”/”Secret Love” double-barrel blasts in Calamity Jane. Maybe someone agrees because this Warner Archive release showcases “Blues” on the jacket of the Blu-ray — which, in addition to the Etting short subjects (her voice never had the oomph of Day’s) throws in an amusing 1955 CinemaScope featurette that deals with what was then MGM’s coming imminent release schedule: a 17-minute commercial called “Salute to the Exhibitors,” which rightfully touts Love Me.

On it, host and future one-term Republican Sen. George Murphy tries to pretend that he approves of Blackboard Jungle — which, of the bunch, probably left the most lasting pop-cultural legacy, though at least one other MGM-’55 title (It’s Always Fair Weather) was a masterpiece that flopped commercially. Overall, though, this studio promotion is something of a hoot because it begins and ends by ballyhooing a pair of colossal bombs: Jupiter’s Darling (with Esther Williams and a string of elephants painted in candy colors) and Lana Turner’s The Prodigal, which is what Peyton Place was a Turner comeback from. It figures that studio chief Dore Schary was fired the next year, though in fairness no one at the time anywhere knew where the industry was going in a period of massive pop-cultural change. A mere two years later, MGM would be releasing an Elvis picture.