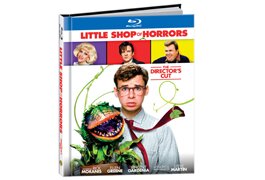 The 1986 Little Shop of Horrors movie is almost as notable for all the trivia associated with it as it is for being a peppy, macabre spoof of Broadway musicals filled with songs you’ll never be able to get out of your head.

Most people are probably familiar with the story’s origins as a low-budget horror flick made by Roger Corman in two days in 1960 almost as a dare. This in turn inspired Alan Menken and Howard Ashman to create an off-Broadway play in 1982 that put to song the story of the Audrey II, the mysterious plant that grows by feasting on blood and flesh.

Yes, that’s the same Menken and Ashman who would kick off the 1990s with a slew of Oscars for the music of The Little Mermaid and Beauty and the Beast. Who would ever have thought the darkly comic minds behind Little Shop of Horrors would go on to help engineer a Disney animation renaissance?

Then again, the film version of the Little Shop musical is directed by Frank Oz, the guy behind Miss Piggy and Yoda.

The film is loaded with sublime casting choices, and not just Rick Moranis, who is perfect as the nebbish Seymour. Ellen Greene reprises her role from the stage play as Audrey, Seymour’s love and the namesake of the plant.

Two of the three chorus girls, Tisha Campbell and Tichina Arnold, are perhaps better known today for co-starring on the TV sitcom “Martin,” with Campbell opposite Martin Lawrence as his love interest.

The cameos are a lot of fun. Steve Martin practically steals the movie as a dentist with a showstopping number about how sadistic he is. And be on the lookout for Bill Murray as a patient who thrives on pain (a character cut from the original film that was cut from the play), John Candy as a radio DJ, Christopher Guest as a wide-eyed shopper interested in the Audrey II, and John Belushi as a salesman who wants to clone the plant.

And then there’s that original ending where the planet eats everybody and tries to take over the world.

While the finished film features a happy ending for Seymour and Audrey, those who have seen the play know it ends with Audrey II eating them and turning against the audience. The film’s original ending was appropriately based on the stage play, but test audiences hated it because they loved the characters so much.

This Blu-ray edition includes the color version of the original ending, a 10-minute sequence of Audrey II running rampant across New York to the tune of “Don’t Feed the Plants.” The footage briefly appeared as a black-and-white extra on the 1998 DVD release of the film before it was recalled.

The sequence has been cleaned up for HD with finished visual and sound effects. The puppet effects are amazing and scene is imbued with so much manic exuberance it’s impossible not to have fun watching it, despite the insane levels of destruction on display. Fans can view the theatrical version of the film or the director’s cut with the original ending. I’d say the theatrical cut, being the one I’m most used to seeing, is the better version overall, but the original ending plays just fine on its own.

The Blu-ray is designed mostly around the director’s cut, with Oz discussing the original ending in a new featurette. The disc also includes Oz’s 1998 commentary on both the film and the original ending, as well as a vintage 1987 featurette about the film, outtakes, deleted scenes and trailers.