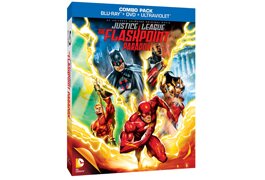 Out July 30 on DVD and as a Blu-ray Disc combo pack, Flashpoint is aptly named, following DC superhero The Flash (voiced by “Grey’s Anatomy’s” Justin Chambers) as he goes back in time and changes history to save his mother’s life. The result when he returns to the present: Aquaman’s (Cary Elwes) Atlantis and Wonder Woman’s (Vanessa Marshall) Amazons are at war. Batman is a borderline psychotic (more than usual). Superman, who normally saves the day in these situations? Nowhere to be found.

“We did a lot of research, crossover work, gave [ourselves] benchmarks to hit,” Oliva, said, speaking at the 2013 San Diego Comic-Con International. “Once we got the script, we hit the ground running.”

Flashpoint screenwriter Jim Krieg (“Batman: The Brave and the Bold”; “Green Lantern: The Animated Series”) credited the positive result of the film with the original 2011 comic on which it’s based.

“This project benefited from taking something so rich and condensing it,” he said. “[We had] a rich world to draw from.”

Oliva was especially thankful that he and his team were given a hands-off attitude from the studio to produce Flashpoint the way they wanted.

“Warner trusts the team to bring these titles to life, and they’re hands off in a good way,” he said.