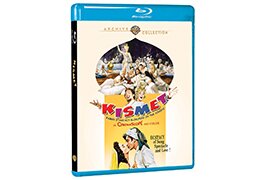 When I was a kid in the summer of 1955, the market up at a nearby shopping center sold 45s to along with the more expected Vernors Ginger Ale and potato salad, and this most WASP-ish of establishments (my community would go for Goldwater in the 1964 election) didn’t just limit itself to the expected Julius La Rosa or Somethin’ Smith & the Redheads. Right up by the checkout counters, the management offered Fats Domino’s recording of “Ain’t That a Shame” (back when the Imperial record label was still red, pre-Ricky Nelson) and Chuck Berry’s “Maybelline.” So it was into this breaking-news environment (two or three months later, actually) when cost-cutting MGM brought out an instantly creaky musical version of Kismet — semi-direct from the ’53 stage musical version, which had taken a Tony — filmed in Eastman Color on obvious sets and against obvious backdrops and mattes by none other than Vincente Minnelli himself. As with It’s Always Fair Weather (great), Hit the Deck (which is still an arguable guilty pleasure) and Jupiter’s Darling (equally arguable campy-trash ecstasy right down to multi-colored elephants), here was still another of the year’s Metro musicals that performed badly at the box office in a sign that tastes were changing.

Time hasn’t been kind to this version of Kismet, but Eastman or not, I applaud the 2.55:1 look of this Warner Archive release for anyone whose tastes gravitate toward mega-primitive directions when it comes the Cinema of Baghdad. Here’s Howard Keel in another fake beard pretending to be a poet named Poet who sells rhymes in the marketplace (perhaps not a bad job for former movie critics) to eke out an existence with his petite cutie of a daughter Marsinah (Ann Blyth, a good soprano but most memorable as Joan Crawford’s snotty, hit-her-with-a-grapefruit offspring in Mildred Pierce). This sets off a series of misunderstandings and mistaken identities that wear out their welcome over the course of 113 minutes, though curio fanciers will note that this one boasts Vic Damone’s final big-screen acting role in a musical plus the final film appearance of Monty Woolley, though he would not-much-later play himself in the Frankenheimer-directed teleplay of Kay Thompson’s Eloise, which aired on CBS’s “Playhouse 90. Wait, Mike, do you mean that woolly-bearded Woolley — the Man Who Came to Dinner himself — found himself in this environment? Well, the supporting casting is kind of gonzo all around: Sebastian Cabot (actually, far from a stranger to this kind of movie), Jack Elam, Jamie Farr, Mike Mazurki, Ted de Corsia (no, no!) and Jay C. Flippen. Merely by itself, the concept of a Jay C. Flippen musical is kind of out there — though just three days after Kismet premiered, TODD-AO opened the movie version of Oklahoma!, which means that two JCF musicals launched in the same half-week.

The best known of previous screen Kismets was MGM’s 1944 non-musical Technicolor version with Ronald Colman and Marlene Dietrich, which I own but have never seen (it, too, is available as a Warner Archive release). Following the play’s lead, this musical version took Alexander Borodin melodies that were then revamped by Robert Wright and George Forrest, the result being a couple pop hits. One was “Baubles, Bangles and Beads” (pop-charted by Peggy Lee and, post-movie, the Kirby Stone Four), and “Stranger in Paradise” — which hit hugely for both Tony Bennett and the Four Aces and later became the centerpiece of that famously schlocky classical music ad with actor John Williams that used to air in the early a.m. In an oddity of placement, both songs are performed very closely to each other in the movie, which means that there’s a brief period here when something resembling a pulse reading can be discerned. The rest is actors standing around inside a very wide screen not knowing what to do with their hands while Damone looks as if he’s reading his lines off cue cards (he was not quite this stilted in his other movies). Dolores Grey, though, always gives me a chuckle, and Minnelli would later use her to good advantage in 1957’s Designing Woman amid a pretty fair artistic streak of his that would span 1956-60 before the bottom, alas, pretty well fell out of his career.

Perhaps sensing that this release is a niche item, Warner has piled on some better-than-anticipated extras, the foremost being the CinemaScope Oscar-nominated documentary short The Battle of Gettysburg (glad to have it, though not sure why it’s here unless it played some of its engagements with Kismet). Despite Leslie Nielsen narration, it’s played perfectly straight because Nielsen was decades away from the whoopee-cushion era of his career. Much funnier (even funnier than Kismet’s supporting casting) is The First Bad Man — a cartoon about the prehistorically deep history of Texas that represents Tex Avery at his best. Again, why is it here?, but we’ll take it — and I have to wonder if it in any way some of its prehistoric material inspired Hanna and Barbera to launch The Flintstones. Other footnotes-or-more include trailers, deleted numbers and two 1955 excerpts from ABC-TV’s The MGM Parade, a promotional half-hour show where former hoofer and future U.S. Rep. George Murphy tried to convince us in his hosting duties that studio honcho Dore Schary was an inspired production chief. On it, a clean-shaven Keel shows up in a coat-and-tie to talk about all those fake beards he’d been wearing on screens throughout the ’50s. But what worked, even at the box office, with Metro’s 7 Brides for 7 Brothers just a year earlier no longer did, and in this case, the studio got trimmed for more than a $2 million loss.