Hobbit: The Battle of the Five Armies, The (3D Blu-ray Review) 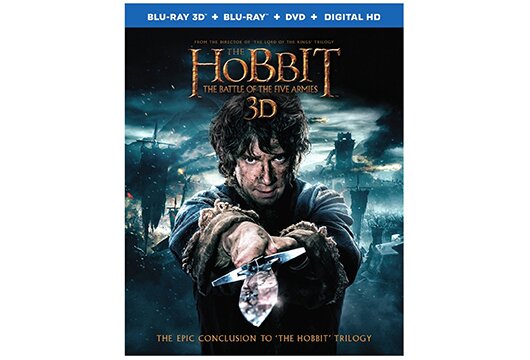 The concluding chapter of the “Lord of the Rings” prequel trilogy, The Hobbit: The Battle of the Five Armies is the embodiment of all of Peter Jackson’s most troublesome tendencies as a director. The film is bloated to the border of boring, stuffed with too many characters, action sequences that run way too long and CGI that makes the backgrounds look like a video game.

And that’s not to mention the primary issue with the movie, which is that it covers just the final fifth (about 60 pages out of 300) of a book that’s 100 pages shorter than any of the “Lord of the Rings” books to begin with. In this case, the film begins with the dragon Smaug’s attack on Lake-town, causing the survivors to flee to the Lonely Mountain, which has been reclaimed by the dwarves as their long-lost kingdom. Without the dragon to defend it, the strategic value of the mountain causes several armies to show up to fight over it, resulting in the battle that gives the film its title and takes up about half the running time (a merciful 144 minutes; for context, in the book the battle is covered in 10 pages).

The visual effects of the battle are impressive, but the stunts are so entombed within a CGI cocoon they lack any real impact. Nondescript characters fight and die, until the battle eventually focuses in on a face-off between the trilogy’s primary hero and villain, which will finally decide the overall fate of things.

Oh, and Bilbo Baggins and Gandalf are in the mix too. Gandalf is finally back from his misadventures with other characters from the original “Lord of the Rings” movies who weren’t in the Hobbit book, as they prevent “LOTR” villain Sauron from making a full-fledged return here.

The financial incentives for splitting the film into three parts are obvious, since the move essentially tripled its box office take. But creatively, it drags on and on and on that only the most ardent “Lord of the Rings” enthusiast could possibly have any patience for all of it. As a result, mainstream audiences made it the lowest-earning box office performer of the trilogy, a rarity for a final installment.

To pad out the running times into a proper trilogy, Jackson has reached into the depths of “LOTR” background lore and various appendices, though most of the add-ons are annoying references that foreshadow events from the later-set trilogy, with a side dish of a dwarf-elf romance subplot. It really applies a darker tone to a story that was meant to be more fun and lighthearted, though probably keeping to the spirit of the supposed desire of original author J.R.R. Tolkien to re-write The Hobbit as a more mature tale to match the books that followed it.

But the fact remains that had Jackson been truer to the book, this could have been a tight, thrilling, solid three-hour movie and a more worthy prequel to the “Lord of the Rings” trilogy. There are already several fan edits in the works to cut down the considerable “Hobbit” footage into a single film, and it would probably behoove Warner to follow suit and release an official abridged version on home video (a nice contrast to the steady stream of extended cuts we keep getting).

Sure, Battle of the Five Armies is worth a look, and the Blu-ray is a great way to demonstrate the clarity that HDTVs have to offer. But this isn’t going down in history with the reverence the first trilogy seems to have.

Though you can’t blame the makers of the Blu-ray for trying to hand wave over that one. The most interesting extra on the disc is a featurette about how the “Hobbit” films link up with “Lord of the Rings,” using a healthy dose of footage from the earlier movies as if to convince fans to conflate their esteem for those movies with these new ones.

Other short featurettes include looks at the make-up and production values of the final battle and a look at the making of the end-credits song, performed by “Lord of the Rings” star Billy Boyd. There’s also another travelogue promo for New Zealand, where the films were shot.