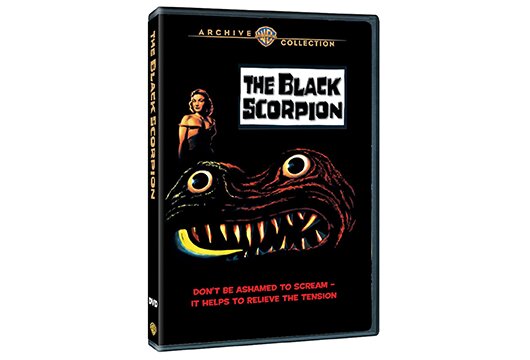 Mara Corday had a tough creature-feature go of it in the mid-to-late 1950s, and this isn’t even counting her appearance in Francis Joins the WACS. The onetime Playboy Playmate and early-on Clint Eastwood buddy was the female lead in Tarantula! (which also spotlighted Clint in a small role); and then The Giant Claw (whose audio screeches were brilliantly imitated by my older son when he was four); and then this Mexico-set 1957 cheapie for which King Kong’s Willis O’Brien supervised the special effects on a tight budget. Ballyhooed in Mexico City theaters as El escorpion negro, this has rated a Warner DVD before — but as with Bette Midler’s Divine Madness and the standout Sidney Lumet drama Running on Empty, it is just now rating a belatedly proper widescreen released via the studio’s Warner Archives arm.

To show that era typecasting didn’t just apply to women, the male lead here (as a scientist, natch) is golden-haired Richard Denning, previously of Creature From the Black Lagoon, then Creature With the Atom Brain (which was co-billed everywhere in my creature-feature childhood with Ray Harryhausen’s It Came From Beneath the Sea) and then Day the World Ended, whose monster looked a tad, uh, primitive, even by Roger Corman standards. So for the two leads here, it’s just another day at the office when volcanoes unleash hitherto trapped scorpions (including one real salivating Mother) into the Mexican countryside, which doesn’t exactly do wonders for the fortunes of the Corday cattle ranch that she regularly traverses in slightly bulging form-fitting slacks.

The effects, which are why anyone will be watching, are hit and miss, though there’s a good extended scene (complete with a kid stowaway most will want to toss into the nest) where Denning and his jokey colleague (Carlos Rivas) get lowered into a cave that’s the source of the movie’s mayhem. In my hometown, the booker of a 2,800-seater paired this with the truckers-on-uppers melodrama Death in Small Doses, which must have been his idea of a loss leader. (A rival theater was playing Alan Freed and Chuck Berry in Mister Rock and Roll, in what was certainly a time of intellectual pursuits.) And, by the way, this wasn’t even the most nutso picture Edward Ludwig made in the ’50s, given that he’d already directed John Wayne’s HUAC-Hell-on-Wheels cam fest Big Jim McLain during the Red Scare.

New on Disc: 'Inherit the Wind' and more …