Bewkes: 'The World is Going to VOD' 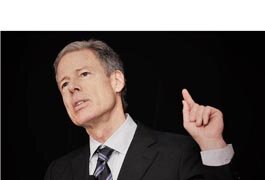 From time-shifted distribution of movies and TV shows on the DVR, to the advent of subscription video-on-demand services such as Netflix, dissemination of home entertainment to the consumer is an increasingly fractured experience, which Time Warner CEO Jeff Bewkes says is a good thing.

Speaking Dec. 10 in a keynote at the UBS Global Media and Communication confab in New York, Bewkes said the emergence of SVOD and TV Everywhere platforms has brought enhanced value to scripted content, in addition to incremental revenue opportunities for distributors.

A former critic of SVOD, Bewkes now embraces the format and VOD for enabling greater connections to content for consumers due to the personalized nature of distribution. That “consumer control” helps forge stronger bonds with content holders, according to Bewkes.

“The big news, and it’s really good news, is that the world is going to video-on-demand,” he said. “It’s such a powerful thing.”

The CEO argued that most consumers’ favorite entertainment programs are scripted and serialized. He said that, until the advent of VOD and streaming, it was impossible to stay abreast of a program if you missed the initial broadcast without recording it.

“The whole vibrancy of [today’s scripted ]programming depends on your ability to watch it, in the order you want to watch it,” Bewkes said.

Bewkes said the proliferation of on-demand viewing has upgraded the value (and monetization) of content license rights. That said, the executive said rollout of TV Everywhere platforms to consumers remains spotty. Bewkes credited Comcast (and Verizon) for embracing on-demand distribution via  the Xfinity platform.

“It’s as good as any interface that is offered by Silicon Valley,” he said. “SVOD is pretty healthy right now.”

Indeed, Warner Bros. will realize about $350 million in incremental license revenue from SVOD (i.e. Netflix) in 2013.

However, Bewkes said similar license rights given to other distributors, whom he said “could give their customers a much better user experience,” haven’t been exploited to their potential. The result, he said, is missed revenue opportunities.

The CEO said speculation on the emergence of a virtual MVPD or two in the near future could be the catalyst the industry needs to improve the overall user-experience of on-demand viewing.

“If we don’t fill that need, then it gets filled by somebody else,” Bewkes said.