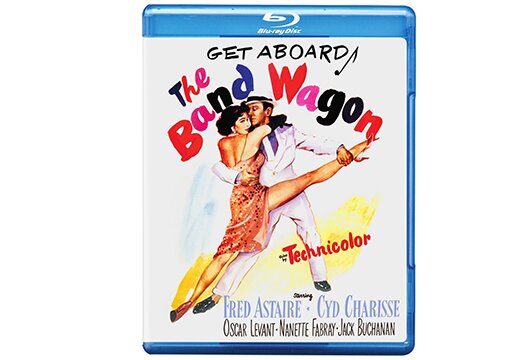 I’ve always been a tad (but no more) defensive when proclaiming this Arthur Freed/Comden & Green/Michael Kidd/Vincente Minnelli whopper as my favorite screen musical of all time due to Singin’ in the Rain’s massive upswing in critical hallelujahs over, say, the past 20 years in particular. But you know what? Here are Liza Minnelli (admittedly, a not disinterested party) and Michael Feinstein saying the very same thing to open a bonus commentary carried over from 2005’s Band Wagon DVD release. So there!

In truth, I would never go to the mat over this because it inevitably degrades Rain — a stupid thing to do when there are too many around (they’re probably running studios) whose idea of a musical (or, for that matter, the ’50s) is Grease. Besides, a) Rain dukes it out with the senior Minnelli’s Meet Me in St. Louis as my second favorite musical ever; and b) if you really want to see what the form was all about when Technicolor still mostly reigned, the previously-on-Blu-ray Rain is included with Wagon and two more high-def premieres in Warner’s new-as-well Musicals 4-Movie Collection (1952-53, $34.99) from that leads off with Wagon. Are you following this? Well, more on the latter, later.

Essentially, Wagon does for Broadway what Rain does for or to the movies — satirize them with the wit and savvy that only screenwriters Betty Comden and Adolph Green could have mustered up. One advantage Rain may have over Wagon is a script so funny that the picture likely could stand alone as a straight comedy about Hollywood’s painful transition to sound had MGM seen a reason to go that way. This is by means to deny that most of the way, Wagon’s writing is as funny as its one-year predecessor’s — but in a kind of daring move roughly around the two-thirds mark, story considerations get scrapped almost altogether, and Wagon turns into a dazzling rat-tat-tat revue with one socko Howard Dietz-Arthur Schwartz musical number after another. One can argue that it took 16 more years until The Wild Bunch for a movie to expend so much climactic ammo.

Comden and Green were a little skittish about casting Wagon lead Fred Astaire in the role of a stage/screen has-been who, not long into the movie’s opening, gets ignored by the press in a train station so that they can ogle the ’53 Ava Gardner (personally, I wouldn’t take this as an insult). Astaire was hardly on the skids in real life, but he had announced his retirement a number of times, and his previous picture (for all its Currier & Ives charms) was among his most minor: The Belle of New York. Plus, his real-life wife was ill during a period not long before her death, so it was not a good period for him. But Astaire went with the teasing, and the script even incorporated some of his concerns that co-star Cyd Charisse (getting her first huge break as a musical lead) might be too tall for him.

As play authors, Oscar Levant and Nanette Fabray are “doing” Comden and Green — Levant in a milder version of the hypochondriac whose later appearances on “The Jack Paar Show” convulsed my friends and me when we were young teenagers, and Fabray not long before she replaced Imogene Coca as Sid Caesar’s TV partner (I always thought she was funnier and more versatile than Coca, who was pretty great herself). Perhaps the great coup here was the casting of Brit Jack Buchanan as the full-of-himself director hired to shape a Levant-Fabray book into a Broadway musical that becomes, under his heavy hand, a gloom-and-doom take on Faust. Huge in Britain, Buchanan had previously experienced a Hollywood career on the low side of limited, but he made up for it here with a single picture, and I’ve always thought he should have had the ’53 supporting Oscar nomination that went to Jack Palance in Shane (the other four nominees are much tougher to argue against). Playing a character said to have been inspired by Jose Ferrer, Buchanan is as important to Wagon as Jean Hagen (who did get an Oscar nomination) was to Rain in terms of hilarity. And he did it while undergoing (notes the disc commentary) three root canals during filming, just four years before his death.

While the movie is kind of a “greatest hits” collection from the Dietz-Schwartz catalog (Dancing in the Dark, By Myself and a lot more), the one song they didn’t pen here — Comden & Green’s “That’s Entertainment!” — is certainly a contender for the all-time show biz anthem and is given a spectacular rendering by Astaire, Charisse, Levant and Fabray (it’s also reprised at the end). And as if The Band Wagon didn’t have enough selling points, Michael Kidd himself did the inventive choreography — with a lot of flash in the expansive Girl Hunt Ballet that caps the picture but with a quieter subtle touch during Astaire’s vocal of “I Love Louisa” in cramped quarters. My favorite number in the picture is the low-key tux-and-tap rendition of “I Guess I’ll Have To Change My Plan” by Astaire and Buchanan, which is treated almost as a throwaway yet always brings a smile to my face. As was always true when Minnelli was really cooking — and above and beyond his trademark way with décor — the camera always seems to move where the eye wants it to go, often just a foot or so away from where it was in the previous shot.

Also making their Blu-ray debuts as solo releases but additionally included in the attractively priced box set are the Warner Bros. hit Calamity Jane and MGM’s screen take on Cole Porter’s Kiss Me, Kate — both energetic and delivering a lot of goods, though if you’re dense enough to be a Doris Day detractor, she’ll probably wear you out as Jane, by cracky. An obvious attempt to re-mine the milieu of Annie Get Your Gun (which previously utilized some of the Kate screen team), it’s actually a better movie than the one MGM got out of that Irving Berlin stage smash, even though Annie is packed with a score of standards (which Day herself later recorded in the early ’60s with Robert Goulet for a super LP). Even so, the Jane score is a rouser all by itself — opening with “The Deadwood Stage (aka Whip Crack Away!)” right off the bat and climaxing with the Oscar-winning “Secret Love,” a recording so popular that it kept Dean Martin’s “That’s Amore” from ever reaching No. 1. The movie was popular, too, though why the Bedlam mental institution escapee who booked double bills in my hometown paired it with the Cleo Moore-Hugo Haas adultery saga Thy Neighbor’s Wife in a downtown movie palace is something not even known to the Ohio Historical Society. There’s also been a lot of talk in recent years about the gay subtext in “Secret Love,” but at the time (November ’53), we kids were oblivious and much more concerned with Otto Graham’s passing for the Cleveland Browns.

Rendered here in 1.75:1 (which is how most non-sticks theaters were likely running it by Thanksgiving ’53), Kate ranks with John Wayne’s Hondo as the best movie released in 3D. The Blu-ray contains both 3D and 2D versions, though I don’t own a 3D set and thus can’t pass judgment on the trajectories of Ann Miller’s flying apparel (though I’ve seen a 3D Kate theatrically a couple times). As with the just-as-revered House of Wax, both films were shot in inferior (i.e. non-Technicolor) color processes — in Kate’s case Ansco Color, which was usually hideous. Here — against the stylized sets for the stage-production part of the story — it kind of works in a dreamy, hazy kind of way, though no one will ever convince me that Technicolor wouldn’t have been better. Howard Keel and Kathryn Grayson are the leads, but the picture is stolen by the dancers: Miller, Tommy Rall, Bobby Van and Bob Fosse all doing a lot for choreographer Hermes Pan’s resumé. The “Tom, Dick or Harry” number is one of the most excitingly staged and shot musical numbers I’ve ever seen (the audience always broke into spontaneous applause whenever I showed it at the AFI Theater), and when dancer Fosse (with Carol Haney) was allowed to make a crucial choreographic contribution to “From This Moment On,” a new career was born.

Individually, or as part of this irresistible box, The Band Wagon is still my pick, but anyway you cut it, 1952-53 was a kind of peak for musicals. By ’54, even pace-setting MGM was cutting back on costs, which is why Minnelli’s 1954 take on Brigadoon looks a little cheesy. You’d never know from this collection, though, that an era of lowered expectations was imminent, Ansco Color or not. With extras carried over from the DVD releases an occasional fresh inclusion, this is “Whip Crack Away” all the way as boxed sets go.

New on Disc: 'The Band Wagon' and more …