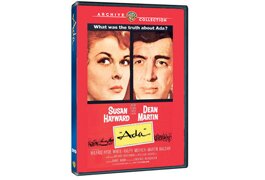 Back when I was programming Washington, D.C.’s old Kennedy Center-based AFI Theater in one of my other lives, Ada (or, as it says in the opening credits, “Ada”) figured into a couple scheduling fantasies (one general, one specific) that were never realized. One was to concoct a film series called The Statehouse, which would be full of movies about politics on the local level — most of them packed with the requisite doses of graft and corruption. The other was to pair Ada in a double bill with 1946’s If I’m Lucky for a Billboard pick-to-click package of movies in which, respectively, characters played by Dean Martin and Perry Como run for governor.

The tone of Ada and the more musically driven Como vehicle differ substantially (just for starters, Lucky co-stars Carmen Miranda as an unlikely “Michelle O’Toole”). Ada, in fact, is another MGM potboiler of the day based on one of those lurid-looking paperbacks (Ada Dallas by Wirt Williams) that I can recall staring at me in the same drugstore where I used to thumb through Police Gazette and Argosy as a young teen. Except that, appearances notwithstanding, it really mustn’t have been that trashy or trashy at all — because Ada Dallas (the source title) was one of three Williams novels nominated for a Pulitzer.

From the movie, you’d never know this; it’s as loopy as Michelle O’Toole. Martin plays a guitar-strumming gubernatorial candidate in another of those screen-familiar “unnamed Southern states” whose campaign song (its performance is among the movie’s opening salvos) is not what you’d call bedrock Dino material. Titled “May the Lord Bless You Real Good,” it sounds as if it belongs somewhere in Robin and the 7 Hoods as a complement to that Rat Pack big-screen swan song’s Martin essential: “Any Man Who Loves His Mother (Is Man Enough for Me).” Apparently feeling blessed himself, Martin’s “Bo Gillis” does what any other gubernatorial candidate in a trashy ‘60s melodrama would do: meet onetime prostitute Ada (Susan Hayward) in what looks like something fairly close to a brothel itself — and marry her.

This doesn’t exactly rate a marvy reception from a sneaky Bo campaign advisor played by Wilfrid Hyde-White (Wilfrid Hyde-White and Dino: now there’s a study in contrasting acting disciplines), who a) helps orchestrate a scandal involving the opponent’s wife; and then b) pulls the strings on which bills his own candidate signs once this Neapolitan brand of country boy is elected. We’re not exactly dealing with All the King’s Men here, but for anyone who regards loopiness as its own reward, we do have Hayward’s no longer wayward spouse donning pearls and dress-for-success women’s suits after wangling her way into the lieutenant governor’s slot — and then pulling her own strings after ascending to power following an assassination attempt on her husband.

Even before Bo/Dino leaves the screen for a long stretch Brando/Godfather style after his character’s hospitalization, the movie plays much more like a heavy-breathing Hayward vehicle (and, in fact, she is top-billed here). The actress was still riding the wave from her 1958 I Want To Live! Oscar, ranking among the femme few of the era who were capable of brandishing a pair when 35% of the shows on TV were Westerns. “Tough Mama,” as Bob Dylan would later sing on Planet Waves — though the same year Hayward did Ada, she was still capable of going the standard weeper route in another remake of the by now wheezy Back Street. (And this just a couple years after she’d “gone outdoors” with Woman Obsessed and Thunder in the Sun.)

No one ever called director Daniel Mann an auteur, but in a nine-year run, he guided three performers to best actress Oscars: Shirley Booth in Come Back Little Sheba; Anna Magnani in The Rose Tattoo (beating her closest competition Hayward in the Mann-directed I’ll Cry Tomorrow); and Elizabeth Taylor in Butterfield 8 (though even Taylor thought this one was a miscarriage of justice). Ada was his first movie he did after the Liz Oscar, and it precipitated the toboggan-like downward trajectory of his career — though it’s only fair to note that a couple big commercial hits that no esthete wanted at the dinner table (Our Man Flint and Willard) would follow. More artistically typical were a couple Mann/Martin fizzles that nonetheless could claim titles fully suited to the singer’s persona: Who’s Got the Action? and Who’s Been Sleeping in My Bed?

New on Disc: 'Letter From an Unknown Woman' and more …