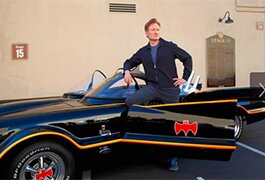 Conan O'Brien with the 1960s Batmobile

The cult-classic 1960s “Batman” TV series starring Adam West is set to make its long-awaited DVD debut in 2014, according to Warner Home Video.

A tweet from Conan O’Brien broke the news Jan. 15 when he wrote “Very excited @WBHomeEnt is releasing the Batman ‘66 Complete TV Series in 2014!” and posted a picture of himself next to the classic Batmobile from the show. O’Brien is connected to Warner through his talk show on TBS, which is recorded on the Warner lot.

The “Batman” TV series has long been sought by collectors (listed along with “The Wonder Years” by TVShowsonDVD.com as one of the most desired shows not yet on DVD) but has been delayed for DVD release due to a variety of obstacles and legal factors. The 1966-68 show was originally produced by Fox, and that studio was able to release a DVD and Blu-ray of the 1966 spinoff film while the show sat in the vault, viewable only through various TV syndication deals.

Speculation that Warner, which currently owns the TV and movie rights to the Batman character, had cleared any release hurdles ran rampant at the 2013 San Diego Comic-Con International when some of the registration bags provided by the studio were adorned with imagery from the show, touting a recent licensing agreement for new merchandise. In addition, Warner sister company DC Comics recently began publishing a comic book based on the show.