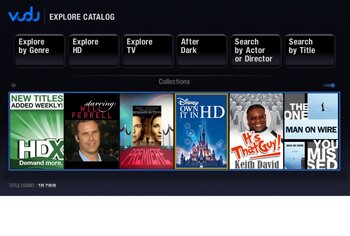 Vudu said it plans to offer more Disney titles in high-def in the coming weeks, and new releases will be offered day-and-date with DVD and Blu-ray Disc, Vudu said. Disney titles purchased through the system will be stored on consumers’ Vudu boxes and will be available in Vudu’s 1080p HDX format.

The titles range from the “Pirates of the Caribbean” trilogy to No Country for Old Men. While newer animated fare such as Tinker Bell and Bolt are offered, Disney is not offering any of its more famous, classic animations, such as Snow White and the Seven Dwarfs or Pinocchio.

Vudu has relationships with every major studio and more than 50 independents, with a library of more than 16,000 movies and TV episodes. Nearly 2,000 of those are available in high-def. Rentals from the service start at 99 cents, TV episode downloads start at $1.99 and movie download-to-own options begin at $4.99, running up to around $20 for a new release.

In May the company announced it was offering ad-supported music videos for streaming instead of download and was looking at the possibility of doing the same with movies.

Vudu EVP Edward Lichty said his company’s consumers have shown “a strong interest in buying HD films.” However, Russ Crupnick, entertainment industry analyst for The NPD Group, said new data from his firm shows those consumers make up less than 1% of the total American movie-watching population.

“It’s positive for Vudu, but for the set-top landscape it may not mean much,” he said. “The reality is the audience is beyond tiny, and we’re still not seeing an uptake in the set-top download market.”


A complete list of the HD titles from BVHE available now on Vudu: