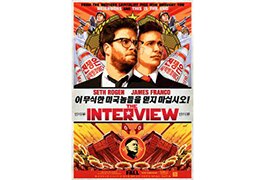 As expected, Sony Pictures on Christmas Eve began offering controversial comedy The Interview on select electronic-sellthrough and transactional video-on-demand platforms, including Google Play, YouTube Movies and Xbox Video, among others.

The ‘R’-rated buddy comedy from Seth Rogen and co-starring James Franco about an interview-turned-assassination attempt on North Korean leader Kim Jung-un, can be rented for 48 hours for $5.99 or purchased for $14.99.

The movie, which has been at the center of a month-long siege on Sony Pictures by cyber terrorists, will also begin screening nationally Christmas Day on more than 300 independent theaters.

“After discussing all the issues, Sony and Google agreed that we could not sit on the sidelines and allow a handful of people to determine the limits of free speech in another country,” David Drummond, SVP of corporate development and chief legal officer with Google, said in a statement.

“As the president made clear [Dec. 19], we do not live in a country where a foreign dictator can start imposing censorship here in the United States. With today’s announcement, people can now make their own choices about the film, and that’s how it should be,” Eric Schultz, deputy press secretary at the White House, said in a statement.

The Interview, with a $44 million production budget, was originally set for nationwide theatrical launch on Christmas. That plan was scrapped after the hacker group calling itself Guardians of Peace threatened to harm moviergoers, and, as a result, four of the nation’s largest theater operators canceled screening the movie.

Sony Pictures CEO Michael Lynton said releasing the movie was essential to the future of the studio following the hacking that exposed company data, unreleased movies and confidential employee information.

“We chose the path of digital distribution first so as to reach as many people as possible on opening day, and we continue to seek other partners and platforms to further expand the release,” Lynton said in a statement.

Sony Lawyer: 'The Interview' Will be Released