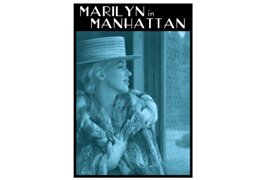 Marilyn Monroe is most often thought of as a sex symbol, not a respected actress or a businesswoman. This documentary explores a side of Marilyn that not many in Hollywood ever saw.

After achieving stardom, Marilyn grew tired of her dumb blonde roles and low salary. One of the first to take the actress seriously was her friend and photographer Milton Greene (Life, Vogue). He proposed they start a production company together.

In 1954, they left Hollywood for New York, with Marilyn walking away from her contract with Fox. Through Marilyn Monroe Productions, she became the first actress since Mary Pickford to start her own production company.

Living in Connecticut with Green and his wife and son, she found a family life with them. By turning off her famous persona, she got around without being noticed.

She also became a part of New York’s jazz scene, helping one of her favorite singers, Ella Fitzgerald, break the color barrier by helping Fitzgerald book a show in a white club.

Around the same time, Marilyn began studying at the Actors Studio under Lee Strasberg, who recognized big talent in her. Without any ego, she worked hard and impressed those around her, including Strasberg. Actors such as the late Ben Gazzara recall her hunger to grow as an actress, while Ellen Burstyn recounts her legendary performances.

Though a short 46 minutes, the doc touches upon many of the actress’ depths and complexities, raising her status beyond the blonde bombshell. While it doesn’t ignore her problems with pills, affairs, lack of education and rough upbringing, it shows rather what she accomplished in spite of all that.