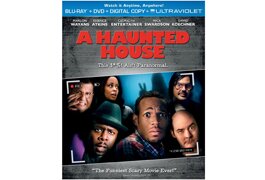 If you’re a fan of the clever “Scary Movie” parody franchise (the first two co-written by and co-starring Marlon Wayans) then you know the premise to Wayans’ A Haunted House — which attempts to take the “Paranormal Activity” movies and turn every creepy scene into a joke.

Alas, Wayans and co-writer Rick Alvarez apparently left the script in the toilet. How else to explain endless fart jokes mixed with over-the-top racial, sexual and gay stereotyping? And why couldn’t I stop laughing?

While answers to the latter might best be left to a professional, House finds Malcolm (Wayans) ditching bachelorhood and inviting his girlfriend, Kisha (Essence Atkins), to move into his well-appointed SoCal home. Things quickly go awry for Malcolm when an indifferent Kisha runs over his dog with her pick-up piled high with belongings, he unsuccessfully tries to revive the pet with jumper cables, and she comes to bed wearing sweats and night cream. So much for the fantasy.

What follows are a series of scenes patterned after Paranormal Activity, The Exorcist and The Blair Witch Project, which include Malcolm’s obsession with POV video; the realization his house is possessed; hiring a quack private security firm to install cameras; and a gay psychic more interested in introducing Malcolm to S&M sex than warding off demons.

Throw in a Latina housekeeper who secretly speaks English, and a white married couple whose wife covets a “Mandingo” party, and Malcolm realizes he needs help from above. Enter Father Williams (Cedric the Entertainer), whose ad-libbed biblical quote in an exorcism scene is the same one Samuel L. Jackson uses in Pulp Fiction.