Get Out (Blu-ray Review) 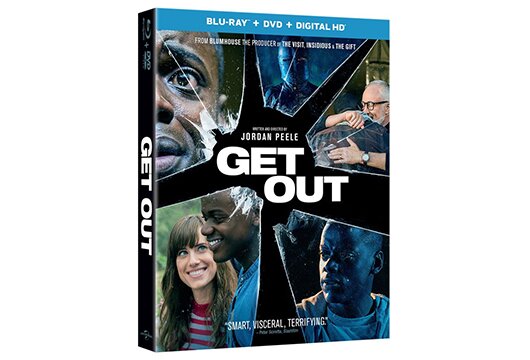 With his considerable background in comedy, Jordan Peele would seem a surprising choice to tackle a suspense film. Yet, with Get Out, his directorial debut, the results speak for themselves. If anything, Peele’s comedic instincts seem to have aided the film, which he also wrote, by allowing him to nicely shift between the film’s darker themes and some moments of levity, a balance of tone that should satisfy audiences.

Peele imbues the film with several strong social messages that don’t detract from its entertainment value should viewers not pick up on them. Nominally, it’s the story of an interracial couple, Chris and Rose (Daniel Kaluuya and Allison Williams) spending a weekend with her parents (Bradley Whitford and Catherine Keener). They preach tolerance and understanding and seem approving of the match, but there’s definitely a creepy vibe bubbling up from beneath the surface. It’s the weekend of Rose’s parents’ annual summer gathering, and soon Chris is confronted by all sorts of old white folks who seem extremely interested in learning about the new couple, while the estate’s black servants seem all too eager to please.

On the flip side, Chris’ best friend Rod (Lil Rel Howery) grows suspicious of the party when Chris calls him to describe it, and begins to form some wild theories about what’s really going on. Needless to say, Rod’s scenes are about as funny as any run-of-the-mill comedy.

The whole set-up is an obvious satire of what Peele refers to several times in his solo audio commentary as “liberal elites” who espouse the principles of fighting racism but often make the problem worse in their meddling.

In addition to touching on the film’s political themes and praising his cast, Peele also uses his commentary to discuss many of the horror classics that inspired him when making Get Out, with Stanley Kubrick’s The Shining being a major one. The commentary is the highlight of the extras and definitely worth a listen as Peele deconstructs many of the film’s intricately designed layers.

The Blu-ray also includes about 27 minutes of deleted scenes, including an alternate ending that’s much edgier and more overtly political. About half the deleted scenes are just alternate takes for the ending that did make it into the film, which seem mostly like Howery ad-libbing different jokes. While these are fun, they speak more to Peele’s comedic sensibilities and would seem more appropriate in another type of film; relegating them to the disc’s bonus materials was a wise move.

The Blu-ray also includes a nine-minute boilerplate behind-the-scenes featurette, and an all-too-brief five-and-a-half minute Q&A panel with Peele and the cast.