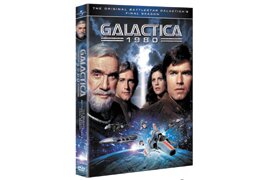 The notorious follow-up to the 1978-79 sci-fi series “Battlestar Galactica” is finally coming to DVD. Universal Studios Home Entertainment Dec. 26 (prebook Nov. 20) releases Galactica 1980: The Complete Series as a two-disc set that includes all 10 episodes of the show for $29.98.

Original series creator Glen A. Larson conceived the show when ABC wanted a less-expensive version of the popular space opera it canceled a year earlier. Lorne Greene returned from the original series to star as Commander Adama, who leads a fleet of spacefaring humans on a quest to locate Earth after their home colonies were destroyed by the robotic Cylons.

In the three-part premiere of “Galactica 1980,” titled “Galactica Discovers Earth,” Adama took steps to prepare Earth for a potential Cylon attack. Kent McCord and Barry Van Dyke played two pilots sent to the planet, while Robyn Douglass played a reporter who helped them on their mission.

The series was soon hampered by its low budget and the introduction of a cast of children to appeal to a family viewing audience.

The lone highlight for most “Galactica” fans is the series finale, “The Return of Starbuck,” featuring a guest appearance by original series actor Dirk Benedict.