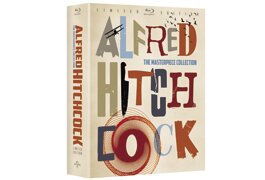 Even 32 years after his death, the legend of director Alfred Hitchcock only seems to grow. The notorious “master of suspense” is the subject of two biopics this year, and Vertigo recently took No. 1 on the decennial Sight & Sound critics poll of the greatest films of all time, surpassing Citizen Kane, which had held the spot since 1962.

Perhaps such a high honor was intended to make up for the fact that somehow Hitchcock never won an Oscar for Best Director. He was nominated five times (but not for Vertigo), and his 1940 film Rebecca won Best Picture.

This represents the Blu-ray debut of all these films, aside from Psycho (which hit Blu-ray two years ago). Specially added to this collection is Warner’s excellent North by Northwest Blu-ray from 2009, making it even more of an essential centerpiece for any collector’s Hitchcock library.

There’s also a handbook containing trivia about all the films in the set, including a guide to where to find Hitchcock’s infamous cameo appearances in each movie.

Rebecca, being an MGM film, is not included in this set, though it is available on Blu-ray, as are a handful of other Hitchcock classics controlled by other studios.

For the films in Universal’s set, the level of quality of the HD transfers varies. Films such as Vertigo and Rear Window, with their rich color palettes, look spectacular in HD. Others, such as Marnie (starring an in-his-James Bond-prime Sean Connery), have a high grain structure that may annoy some viewers. Several of the films suffer from effects shots and matte techniques that haven’t aged well, especially The Birds, though it remains very creepy and at times terrifying. It’s a testament to Hitchcock’s skill as a storyteller that the films hold up as well as they do, despite his tendency for abrupt or overly expository endings.

The set may garner more interest because several of the films in it are re-created in the recent Hitch biopics. The HBO TV movie The Girl features Toby Jones as a sexually repressed Hitch obsessed with Tippi Hedren (Sienna Miller) during the making of The Birds and Marnie. And the theatrical Hitchcock, starring Anthony Hopkins in the title role, focuses on the filming of Psycho.