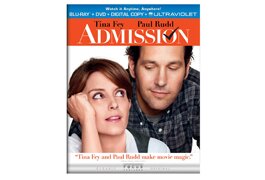 A funny thing happened on the way to making a sure-fire romantic comedy with Tina Fey (“30 Rock”) and Paul Rudd (This Is 40), with a side of Lily Tomlin — a heartfelt movie emerged.

Fey plays Portia Nathan, a long-time Princeton admissions officer whose personality is less Liz Lemon from Fey’s neurotic “30 Rock” TV character and more resigned (and well-played) realist in a world where getting into the most-coveted Ivy League university requires a mix of marketing, an over-the-top high school transcript, and a family legacy or two.

Always likeable Rudd plays John Pressman, a free-spirited teacher at an alternative high school and former college classmate of Portia, who calls telling her about a gifted kid well-suited for Princeton.

John and Portia connect (in a stretch) over the phone, with the former pleading that she come out to the Northeast backwoods (near her hometown) to check out the student, Jeremiah (Nat Wolff). Oddly, Portia, whose weenie fiancé (Michael Sheen) dumped her for an aggressive “Virginia Woolf scholar” (Sonya Walger), makes the visit.

When Portia discovers personal evidence about Jeremiah, she crosses the ethical boundary to ensure his admission.

While the backdrop may appear to be the callous indifference some administrators can have toward aspiring freshman while really trying to elevate their careers and keep Princeton atop the annual U.S News & World Report rankings, in reality, Admission is a story about choices in life. And life lessons often aren’t a joke.