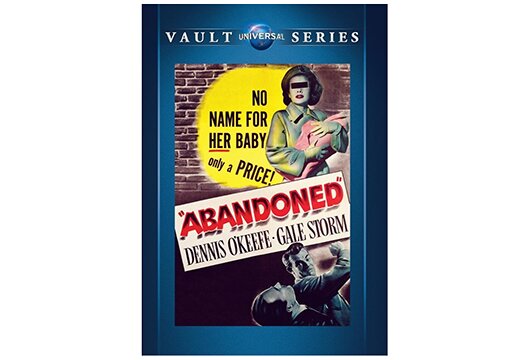 Originally reviewed in major NY-LA publications as Abandoned Woman after someone at Universal-International floated a late-inning title switch that never took, plain old Abandoned from 1949 wouldn’t be worth much attention here were it not for two novel components, one of which involves film scholarship of the highest order. It has to do with the means of torture used to give one of Raymond Burr’s more private parts a super tough time after the low-grade private eye he plays becomes too much of a liability to the crooks who employ him.

This all goes back to the days when an old friend informed me that he had long ago seen a telecast of an obscure movie called Abandoned back in his formative years — one in which Burr ended up being tied down to a table and tortured by someone pulling out his underarm hair with pliers. Talk about an attention-must-be-paid situation: The future “Perry Mason” had always been a reliable film noir villain in the days before CBS Saturday nights cleaned up his public image, especially in the scene where he more or less flambéed a bimbo in Anthony Mann’s Raw Deal. And, for that matter, I’d always enjoyed watching Burr take a blade in his then formidable breadbasket during one of the payoffs in Adventures of Don Juan. But armpit follicles? — welcome to the outer limits.

As it turns out, my friend had it slightly wrong because pliers don’t fit into the torture methodology here. As far as I can tell (mercifully, William Daniels’ camera doesn’t put the exact proceedings in our face), the movie’s main crime-boss adversary is, instead, lighting Burr’s underarm hair on fire with a match, which I suppose works about as well when it comes to making a point. In any event, it’s a scene not to be forgotten — which, for the most part, is something you can’t say for the rest of the movie beyond its other unusual distinction: subject matter involving a baby adoption racket, which, let’s face it, has never been everyday screen material.

Sleuthing the case is a Los Angeles newspaper reporter played by Dennis O’Keefe, a reliable ‘B’-actor who was comfortable playing newshounds when he wasn’t cast as, say, insurance investigators. O’Keefe showed up in countless bit parts during the 1930s before kind of hitting it a decade later. The first time I ever saw him on screen was as a kid amid my neighborhood theater’s brief run of 1955’s Chicago Syndicate, a second-feature that remains notable for its casting of Xavier Cugat in a dramatic role (as “Benny Chico”). But I digress: in Abandoned’s case, O’Keefe labors to expose the baby racket after meeting a young woman (Gale Storm) whose older sister has died under mistaken circumstances (carbon monoxide poisoning assumed to be suicide) after having just given birth. This, of course, smells fishy, so O’Keefe leans on his pal the police chief (Jeff Chandler, in just his second screen role of note) to aid him in justice and possibly reporting glory. For the record, this is the nine millionth newspaper movie to mispronounce “Pulitzer” as “PEW-lit-zer” when it’s actually “PULL-it-zer.”

Cinematographer Daniels had one of the more interesting career trajectories, going from Greed and Garbo to, long thereafter, the Rat Pack and (lest we forget) Rowan & Martin in The Maltese Bippy. In between those surreal extremes, he had a long tenure at U-I, where he won an Oscar for New York-based The Naked City the year before Abandoned. This time, Daniels had the City of Angels at his disposal, and this is one of those movies where L.A. archivists can have a good time soaking up vintage locations. Other saving graces (we’re arguably scraping here) include spirited turns by Marjorie Rambeau (a character actress I always liked) as the Bible-toting front for the illegal operation and Jeanette Nolan as a Salvation Army worker who brooks no sass when it comes to obeying the law. Without overstating the case, I suppose this marked a comeback of sorts for Nolan after her much-drubbed performance a year earlier in Orson Welles’s Macbeth, in which she played the conniving Mrs. (to quote my best gal-pal from high school) “like Mrs. Guckert.” To provide context, Mrs. Guckert was a junior high English teacher who told one of my closest classmates that she hoped he wouldn’t continue to “read books like 1984” and took a lot of to-her-face razzing at the time for forbidding her children to watch telecasts of Popeye cartoons, due to their violence.

The director here was Joseph M. Newman, billed here as “Joe” — though whatever his moniker, he must have had “journeyman” on his business card, notwithstanding that his next picture (711 Ocean Drive) is still better than decent, though not as memorable as Jeff Morrow’s cranial topography in Newman’s This Island Earth. Speaking of heads, Jeff Chandler looks vaguely different here, as he did in all of his early Universals, until you realize that he later turned gray overnight or that the studio was giving him a dye job during his initial contract days. Given that he’d play Cochise in Broken Arrow only a year later, this gave Chandler three “looks” in a relatively short period before he settled on the permanently gray cosmetics that graced his stardom vehicles and his LPs for Liberty Records (a not-bad singer, he actually waxed “I’ve Got My Love To Keep Me Warm”). Of course, co-starring with Joan Crawford in Female on the Beach could change your hair color in an instant and/or put more of it on your chest.