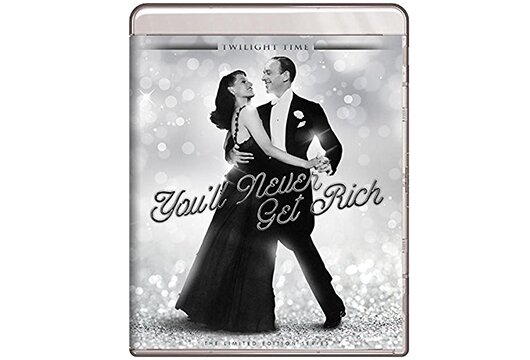 There aren’t many Fred Astaire movies this side of Yolanda and the Thief that one might rightfully term as strange, but the first and lesser of two Astaire pairings with Rita Hayworth isn’t far off that mark. You’ll Never Get Rich, which also served as the original title of what eventually became TV’s “The Phil Silvers Show,” has nothing to do with Sergeant Bilko’s later motor pool escapades (though if it did, “strange” would have to get a new definition). But it’s nonetheless a service comedy in which Astaire spends no little time in the guardhouse, which definitely cramps his style on a sartorial, if not footwork, level. I suppose Rich also qualifies as an “American Dream” movie, in that Hayworth (already studio-groomed as a glamour figure here in what was arguably her breakout picture) plays an aspiring dancer and babe-around-town who doesn’t seem to regard it as below her standards to be involved with an incarcerated grunt.

As it turns out, Astaire has not been to the guardhouse born; the movie opens with him employed as a high-profile Broadway dance director who’s thrilled to be drafted (certainly more than anyone I ever knew) due to the complications of his love life. Of course, Rich’s original Sep. 25 release in the fall of ’41 predated the country’s entry into World War II by two months and change, which helps to explain the treatment of army service as lark. And despite this calendar placement, Julie Kirgo is correct in her Twilight Time liner notes that one might make a case for Rich being the first World War II musical. As with Abbott & Costello’s Buck Privates and Bob Hope’s Caught in the Draft (both comedies released earlier in the year), the passage of decades has a way of blending slightly prewar escapism with the postwar brand in the collective mindset. When I programmed a massive “War Years” series for the American Film Institute Theater in 1979, I paired Columbia’s Rich with Paramount’s The Fleet’s In — which shot in Sep-Oct but came out post-Pearl Harbor in January 1942 — and everything came out seamlessly. (Plus, the Army and Navy got equal time, which was my point.)

Fred’s complex love life has to do with an impresario boss (Robert Benchley) continuously using his subordinate as a kind of beard for his own amorous infidelities behind the back of a weary wife (Frieda Inscourt, who displays just the right combination of suspicious eyes and weary punch-rolling in the kind of expert performance that never gets sufficient credit). This puts Astaire in the position of “protecting” Benchley’s pursuit of a woman he digs himself (Hayworth) — who, in turn, has an army captain boyfriend (John Hubbard) who poses, for a while, as her brother. This is all fairly labored, if not as labored as the movie’s service-comedy shtick. And yet, Rich’s saving graces take up no small amount of screen time, though it would help if there even more.

They are (surprise, surprise) the dance numbers in what was the first film where Hayworth danced a lot on screen, even though her background was as a dancer before breaking into the industry and eventually hitting it big with her knockout non-musical presence in 1939’s Only Angels Have Wings. She’d had a couple major showcases earlier in ’41 with The Strawberry Blonde (comedy-drama) and Blood and Sand (three-strip Technicolor spectacle), but here she proved capable of looking totally at home with her partner, who rated Hayworth very highly on his career list of co-stars. According to his autobiography Steps in Time, which I haven’t read since the late ’50s but is referenced in the AFI Catalog for the 1940s, Astaire says the two rehearsed for seven weeks on their numbers, and it shows. His solos, including one in the Mar-a-Lago of guardhouses in terms of square footage, are inventive as well.

If not among his most memorable, the score is by Cole Porter himself, and one of the tunes (“Since I Kissed My Baby Goodbye”) engendered a soothing Decca single with the Delta Rhythm Boys. My favorite number in the movie is a fabulous moving-image recruitment poster called “Shootin’ the Works for Uncle Sam” — performed in a train station sans Hayworth but with a zillion background dancers. Meanwhile, it’s tough to pick a preferred high point of the Hayworth pairings because, just for starters, the two look so good together in every shot (their heights weren’t that far apart). This said, any musical lover’s bucket list ought to include seeing Astaire and Hayworth dancing on top of the prop department’s most Godzilla-sized fake tank during the camp show that concludes the movie. Of course, only in a movie would you have Hayworth taking part in a camp show in the first place, though the one here displays production values whose tab would likely, in a couple months, go for real tanks.

Yet again, you have to wade through a lot of affable dross to get to the gems, including a lot of standard-issue gags endemic to more service comedies than not until MASH (the Altman masterpiece, not the comparably wimpy TV series) gave the genre some real bite. Rich director Sidney Lanfield’s filmography additionally included six subsequent Bob Hope comedies, and though at least two (one can argue more) were among Hope’s best, this isn’t quite the sensibility you want on an Astaire picture. Purely for novelty’s sake, however, I’m glad this mildly bizarre gumbo exists.

Rich came just before the Rudolph Maté-Hayworth era at Columbia, where the cinematographer’s work on Hayworth’s Technicolor Cover Girl atop his earlier black-and-white brilliance on Carl Dreyer’s The Passion of Joan of Arc amounted to a full career resumé on the basis of just two pictures. Instead, Rich was photographed, turns out, by Philip Tannura, who worked near-exclusively on ‘B’s at the studio (handsome ones, though) and would be shooting TV’s “Racket Squad” in a decade. Under any cinematographer’s name, Twilight Time’s Blu-ray is shimmering when it counts, which does not mean the marching or other boot camp scenes. If we’re blessed, maybe TT will eventually bring out the 1942 Astaire-Hayworth follow-up You Were Never Lovelier, with a topflight Jerome Kern-Johnny Mercer score and a classy elegance that has made it seem even better with the years.

New on Disc: 'The Rounders' Blu-ray and more …