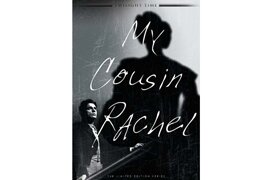 When Richard Burton came through with his breakthrough performance in the movie of famed novelist Daphne du Maurier’s self-proclaimed favorite creation, critics of the day must have had to come up with new definitions of “brooding.” Of course, what Burton goes through with the more-than-kissing cousin on whom he pins his romantic aspirations was possibly valuable prep for his coming on-again/off-again pyrotechnics with Liz Taylor.

For sheer production muscle, I suppose CinemaScope/stereo The Egyptian is the most impressive release the recently launched Twilight Time has so far given us from its samplings of the vintage 20th Century-Fox library. But this is the best overall movie — and one it’s difficult to believe never found its way to DVD at some earlier juncture in home entertainment history. Du Maurier was exceedingly popular (think Rebecca, Frenchman’s Creek, The Birds and Don’t Look Now in terms of print-to-screen adaptations), and the DVD’s accompanying Julie Kirgo essay points out the number of things the story has in common with Oscar-winning Rebecca (including real-life sisters even playing the films’ respective leads) before the two narratives diverge. And beyond Burton’s supporting actor Oscar nomination, Rachel got three more in the black-and-white category: cinematography, costume design and art/set decoration. It’s a movie a lot of people remember, and I can recall one of my seventh grade teachers raving about it in class long before I ever saw it.

Burton’s Brit (a Philip) has a Cornwall-ian cousin/guardian named Ambrose educating him in life’s ways starting from childhood, included some advice imparted when they come across an unfortunate soul swinging from a gibbet out in the middle of some dirt-road nowhere. But Ambrose (John Sutton, an actor who usually played villains) is possibly not so wise when he weds another cousin (Olivia de Havilland’s half-English/half-Italian Rachel) and immediately comes to regret it. Philip, now approaching his mid-20s, is only witness to this turmoil via Ambrose’s letters, which are full of anguish over what he perceives to be a dreadful union undertaken with a woman who really knows how to spend money. The next thing the lad knows, Ambrose is dead, and Philip is ready to give Rachel his best frigid treatment when she finally pays a visit.

Instead, he’s completely taken by the older woman — who still cuts quite a figure for one give or take 35, which was about de Havilland’s age when she made the picture. Rachel was kind of a big deal upon its release for being the first film de Havilland did after winning the second of two deserved best actress Oscar in three years: for 1949’s The Heiress following 1946's To Each His Own. You can get a good sense of how hard the former’s makeup artists must have labored to make de Havilland look plain in that terrific spin-off of Henry James’ Washington Square — but then, more than a decade earlier, there had been quite a cosmetic contrast between her appearance as Maid Marian in The Adventures of Robin Hood and the comparably drab Melanie of Gone With the Wind (released just one year later).

At 25, Philip is just about to come into the inheritance from his guardian — one that would have gone to wife Rachel had Ambrose’s brain cancer not been so advanced that he couldn’t get his affairs in order. Smitten to extremes — and it no doubt complicates matters when Rachel eventually sleeps with him (once) — his libido combines with what he feels is morally right to let Rachel siphon away his holdings. So is Rachel a conniver or just misunderstood? This is the crux of the story, which will delight lovers of ambiguity and possibly frustrate those who like to conclude a movie with all the story’s edges sanded perfectly.

I love Fox movies from between, say, 1945 and 1954 — in part because, until the advent of CinemaScope in 1953, the studio was to black-and-white what Paramount was to Technicolor: the gold standard. The Rachel print here is spectacularly crisp, shadowy and detailed — and once again Twilight Time has isolated the musical score for screen music connoisseurs. It’s particularly welcome in this case because composer Franz Waxman was then in his prime — having won successive Oscars for Sunset Boulevard and A Place in the Sun in 1950-51 and with memorable work to come, even before the decade was out, for Prince Valiant, Mister Roberts, Sayonara, Peyton Place and The Nun’s Story, just to name some personal favorites. I don’t think Burton was ever this good on screen again until Look Back in Anger just as the ‘50s wrapped — though as we know, his career didn’t hit full octane until the middle ‘60s when violet eyes and diaphanous Cleopatra nightwear had their way.