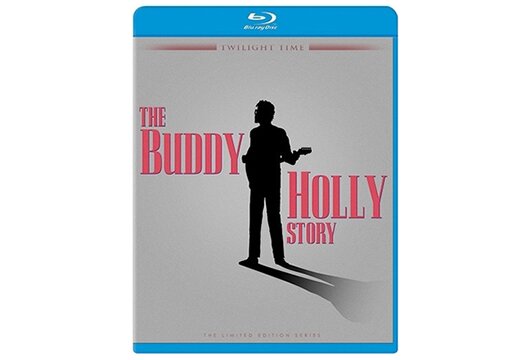 The 1958 night I was lucky enough to see Buddy Holly from the live audience of “The Ed Sullivan Show,” his mic went out during a Crickets-backed performance of “Oh, Boy!” — and I only recently learned (thank you, Google) that this was Ed’s retaliatory doing because he was miffed that Buddy demanded to perform two rockers that night instead of a rocker and a ballad to placate the hardened-arteries viewing demographic that kept CBS going for decades until the advent of the Smothers Brothers. This was almost exactly a year before the 22-year-old’s death in an Iowa plane crash with Richie Valens and The Big Bopper, and you get a sense from this anecdote (he apparently told Ed what he could do with his vaudeville) that this was a kid with a burning-lava kind of drive. Which is exactly what an impossibly slimmed-down Gary Busey conveys in a powerhouse lead performance that got him an Oscar nomination and a best actor win from the National Society of Film Critics. (He also placed second in the New York Film Critics’ voting).

Busey, plus heartfelt acting all around here, carries a modestly budgeted production that became one of the sleepers of its year amid a pack of other good-or-better movies that looked wistfully at rock (see also The Last Waltz, American Hot Wax and I Wanna Hold Your Hand). And it’s a fortunate thing because Story is littered with errors of all kinds (see a very long citation on IMDb.com), starting with the unavoidable one that the Crickets’ name couldn’t be used because the members had signed away rights to their names for a previous, aborted Holly biopic. But there are others that strike an instantly false chord: There were three other members of the Crickets by any name (not two, as portrayed with zeal by Charles Martin Smith and Don Stroud), and I wish someone had nudged director Steve Rash into realization that Buddy and his wife-to-be couldn’t possibly have been seeing a 3D movie in a theater in 1957 because 3D was dead by mid-1954.

But most of the errors are in continuity or are not-as-blatantly anachronistic as the 3D boo boo — the kind of things that happen on a $1.2 million budget that would have been stretched even further had Rash & Co. not acquired music rights from Linda McCartney’s father for a song because he (like Holly’s widow) was infected by the filmmakers’ passion. On most important counts, this is a well-directed movie, and the very first shot of Busey’s “Buddy” is immediately arresting.

Joe Renzetti took the Oscar here for music adaptation, and the sound recording got a nomination. The latter was pumped-up for its day, and I remember this vividly because Story is still the only movie my Easterner/Midwesterner ever saw at the L.A. Cinerama Dome (where The Last Waltz followed soon thereafter). The sound on this Twilight Time disc is so robust for a movie of this vintage that I thought my townhouse neighbors might complain when I was pushing it, but this is a welcome disc all around because the All-Region British release that up to now was only high-def choice (so to speak) is a hall-of-fame eyesore that must have been taken from a print that was stored under damp burlap in Don Stroud’s garage or something. This is much, much better, even though image quality even on theatrical screens was kind of soft in the first place, though it’s markedly more vivid in the concert scenes that are evenly sprinkled throughout. These were famously recorded live on film for a degree of verisimilitude that few rock biopics gave matched, especially those set in the early days.

Starting with his string-bean weight loss, Busey is amazing and does for this film what Chadwick Boseman has just done for the James Brown portrait Get On Up: make it impossible to imagine the movie without him. Like the recent picture, Story is basically “made” by Busey and the exciting staging of the numbers. According to director Rash, who shares this release’s 1998 commentary track with Busey, the movie sparked renewed interest in the singer/composer/arranger who’d been forgotten, even though he’d gotten more sound out of a handful of instruments than almost anyone else at the time.

This is half-disputable, given that both the Beatles and the Stones covered Holly tunes, but maybe so, if you eliminate my circle of friends from the equation. Even in the 1970s, we listened to Holly all the time, but then we were rock-‘n’-roll kids from the beginning. I’ll never forget coming home from sixth grade in early February ’59, picking up the evening paper as soon as I hit the door (as always) and freezing in my tracks at a two line item in the late-breaking “Bulletins” section at the bottom of the front page. I instinctively ran to the TV set and Dick Clark’s “American Bandstand,” where Dick was talking about the crash. This isn’t a story that nostalgia merchants have embellished over the years; it was a big, big deal at the time, and next morning’s paper had grisly crash-in-the-snow photos on the front page, which I then kept in a scrapbook along with other entertainment snapshots of utmost importance (another was Liz Taylor leaning over in a low-cut dress).

Kids don’t have it as exciting today, but then, rock-‘n’-roll can only begin once.