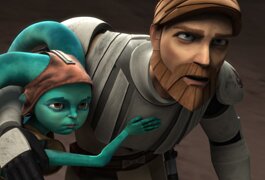 Voices performed by James Arnold Taylor over the years include Leonardo in TMNT, Wolldoor Sockbat on “Drawn Together,” Green Arrow on “Batman: The Brave and the Bold” and the title character on “Johnny Test.” He’s also performed in numerous video games, such as voicing The Fallen in the Transformers: Revenge of the Fallen game.

But he is best known for providing the voice of Obi-Wan Kenobi for several projects dating back to 2003, including the original “Star Wars: Clone Wars” animated micro-series, and several “Star Wars” video games. He reprises the role in the new “Star Wars: The Clone Wars” CG-animated series.

Star Wars: The Clone Wars — The Complete Season One comes to DVD and Blu-ray Disc Nov. 3 from Warner Home Video and Lucasfilm.

Agent DVD recently caught up with Taylor to discuss his work with the “Star Wars” franchise.

Agent DVD: How did you get into voiceover work?
James Arnold Taylor: Ever since I was 4 I knew I wanted to be a voice actor. I sought out voiceover work at a young age. I knew I could do other voices. I was doing Howard Cosell, James Cagney, Humphrey Bogart, Jack Nicholson. I did a lot of work doubling for celebrities in featurettes or movies or video games, when the needed a line of dialogue replaced.

What’s the difference between doubling and doing an impression?
Impressions might turn into a caricature of the voice, and is played more for comedy. Doubling is performing the line as the actor would actually say it.

How did you get the part of Obi-Wan?
It actually started as a standard audition. They were looking for a voice match for Ewan McGregor, and as luck would have it I had doubled for Ewan’s in the past. Our voices have similar tones. When the second show came around, I didn’t have to go through the process as much.

But you aren’t just imitating Ewan McGregor on the show, are you?
I noticed in Episode I that for the first couple of lines, Ewan sounded just like Alec Guiness (who played Obi-Wan in the original trilogy), only younger. So I started doing Ewan doing Alec Guiness. Now, though, I don’t even think of it as another actor’s voice. I just slip into it as Obi-Wan’s voice.

You aren’t from England obviously. Do accents just come naturally to you?
I was born in Santa Barbara. Accents were just something I had an ear for. I would just be hanging out with someone from England or Texas, and I would pick up the twang in their voices. Usually my agent sends me a 10 second sound clip and asks if I can match it, and usually I can just tune into it.

Was learning Obi-Wan that easy?
At first I carried an iPod with me that contained every line Ewan spoke in Episode I and II, and eventually III. I would listen to it before going in to record the voice. But now I can do it pretty comfortably.

Were you a ‘Star Wars’ fan growing up?
I literally grew up with “Star Wars.” I was 7 when the first movie came out. The funny thing is, when we were playing “Star Wars,” I didn’t play Obi-Wan. I usually played Han. And my favorite movie isn't Star Wars, but Raiders of the Lost Ark. Well, I actually go back and forth.

Do you think “Star Wars” has the same impact on kids today?
Kids now are growing up with “Clone Wars” and the prequel movies and are just as excited about those as we were with the original movies.

To what degree have you experienced the enormity of the “Star Wars” fan base?
“Star Wars” has a huge following. It’s a constantly growing universe. It’s amazing how much fan mail I get. A lot of it is from guys my age, mostly guys in their 20s or 30s who want something signed. But they’re so gracious. “Star Wars” fans are among the most loyal and kindest fans out there.

So, do you have any action figures of the characters you’ve played?
That’s one of the coolest things about voiceover work. Some actors are on camera for years and don’t get an action figure. I have quite a collection of figures for characters I’ve played.

What can we expect in the second season of “Clone Wars”?
I think we’re going to see some sides of Obi-Wan, on a personal level, that we never saw before.