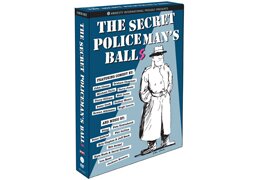 Sometimes the performance is its own reward. For years, the top names in British comedy and music have teamed to stage semi-annual shows to benefit Amnesty International. The results often yield classic performances and unexpected laughs.

The Amnesty shows began in 1976 with a three-day festival known as A Poke in the Eye (With a Sharp Stick).

“John Cleese called some friends to perform for three nights to benefit Amnesty International,” said Jordan Fields, director of acquisitions for Shout! Factory. “It was a fantastic experience that grew to a larger series over the years.”

The stage shows were then edited into 90-minute television specials. The early specials also were released theatrically and on VHS. The first benefit show was edited into a special called Pleasure at Her Majesty’s. This was followed by The Mermaid Frolics in 1977, and The Secret Policeman’s Ball in 1979.

“At the time I believe Amnesty was not well known,” Fields said. “The public awareness grew in no small part to the success of these stage shows and this collection of talent doing these shows for this wonderful organization that fights for human rights.”

Fields said footage had been taken out of Pleasure at Her Majesty’s over the years, so Shout! Factory reconstructed the special for the DVD.

“You get to see mentors perform with their protégés,” Fields said. “John Cleese performs with Peter Cook, then later with Rowan Atkinson. You see the torch being passed.”

Not to be outdone is the assemblage of musical talent, Fields said.

“The remarkable music performances are the other side of the story,” Fields said. “This is really the beginning of the unplugged phenomenon.”

For fans of these performers, the DVDs offer some valuable historical insights, according to Fields.

“For people familiar with these performers, to watch them in this setting is a revelation,” Fields said. “You see them perform with silly abandon. There’s a pure joy for what they are doing. They are genuinely spirited about the way they’re contributing to this cause.”

Fields said that as a Monty Python fan, he was especially excited to work on these DVDs.

“It’s not easy to find footage of Monty Python in their vintage years doing their classic sketches in live settings,” Fields said. “It’s really funny to watch them crack each other up.”

The DVD also includes rare performances from other shows not included in the set, such as The Mermaid Frolics, and introductions and commentaries from executive producer Martin Lewis, who also provided the liner notes.
Fields said Shout! Factory is also planning a separate single-DVD release of the best comedy performance from the specials on the DVD set, and a single-DVD of the best musical performances.