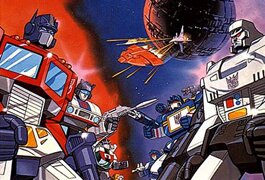 Having secured the rights from Hasbro, Shout! Factory is planning an ambitious release slate for 1980s animated staples “The Transformers” and “G.I. Joe.”

The plan, according to Shout! Factory president Garson Foos, is to debut complete-series sets for each show exclusively for sale at San Diego Comic-Con International, running July 23-26, 2009. After that, the sets will be sold online directly to consumers, before a wide retail release. The hope is to capitalize on buzz surrounding the new live-action films for each franchise.

DreamWorks’ Transformers: Revenge of the Fallen hits theaters June 24, followed by G.I. Joe: The Rise of Cobra Aug. 7. Both films are being distributed by Paramount Pictures.

The Transformers: 25th Anniversary “Matrix of Leadership” Edition Collector’s Set, containing the four seasons of the “Generation 1” series, will come in packaging modeled after the famed Autobot Matrix artifact featured in the original animated film and the episodes that followed.

DVD producer Brian Ward described the set as a “really cool” box with the Matrix on the cover, which slides apart to reveal a shiny blue foil core which houses the set’s 16 DVDs in plastic digistack trays. The set also will include a collectible booklet.

The “Transformers” complete-series set will include two exclusive bonus features, Ward said. One is a conversation with writer Bob Budiansky, who created much of the “Transformers” mythology for the comic book. The other is a roundtable discussion with eight original members of the voice cast, including Frank Welker (Megatron).

Other extras include content available with the season sets, such as featurettes about the origins of the Transformers, the creation of the TV series and the original toy commercials; printable scripts and rare PSAs that never aired in America.

Shout! Factory sources indicated the “G.I. Joe” complete-series boxed set will come in a foot-locker package, and will include only the episodes animated by Sunbow Productions (a different studio produced episodes that take place after the animated movie).

Ward also promises all the episodes from both shows will include their original opening title sequences, but neither complete-series set will contain the animated films produced for each franchise.

Ward said there are currently no plans for a Blu-ray Disc release of the properties, although the new extras are being recorded in high-definition.