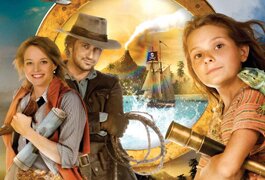 The lack of new hit movies opened the sales chart to a rash of TV DVD season sets and smaller films that might not have debuted as high had there been any theatrical competition. On the First Alert sales chart, for example, Paramount’s South Park: The Complete Eleventh Season bowed at No. 2, while Fox’s season-three set of “Prison Break” debuted at No. 4. HBO’s The Wire: The Complete Fifth Season came in at No. 6, while Disney/Miramax’s Smart People, a satiric film about academia, debuted at No. 7.

Meanwhile, on Home Media Magazine’s rental chart, Smart People bowed at No. 2, chalking up 93% as much action in rental stores as Nim’s Island.

On the Blu-ray Disc front, Warner’s Batman Begins remained on top of the sales chart as fans continue to flock to theaters to see its sequel, The Dark Knight. Lionsgate’s The Bank Jobwas the No. 2 seller, while Sony Pictures’ 21slipped a notch to No. 3 from No. 2.
Bookmark it: digg del.icio.us technorati yahoo facebook twitter
Add Comment